Tottenham open their new stadium against Crystal Palace on Wednesday night. Here is the side we think Mauricio Pochettino will select for the game

Tottenham Hotspur will be desperate to open their new stadium with a much-needed victory over Crystal Palace on Wednesday night. Here is the side we think Mauricio Pochettino will select for the game:

Goalkeeper: The Spurs boss has confirmed he will stick by captain Hugo Lloris despite the Frenchman making an error which led to Liverpool’s late winner at Anfield on Sunday afternoon. Therefore, Paulo Gazzaniga will have to make-do with a place on the bench once again.

Defence: Tottenham have been deploying a back three in recent games so Pochettino is expected to stick with that system despite the poor run of form that’s seen the north Londoners pick up just one point from their last five league games.

Youngster Juan Foyth may be hoping for a recall but I think Davinson Sanchez will keep his place alongside Jan Vertonghen while Toby Alderweireld should also retain his spot despite scoring an own goal at the weekend.

Midfield: Serge Aurier remains out with a hamstring injury that he picked up during the international break so Kieran Trippier will keep his place in the right wing-back position but we could see a change on the opposite flank with Ben Davies coming in for Danny Rose.

Harry Winks will return to the squad after recovering from a groin injury that’s hampered him in recent weeks but the midfielder may only be deemed fit enough for a place among the substitutes.

Eric Dier has been ruled out as he’s still nursing a hip injury that he sustained while playing for England during the international break.  Victor Wanyama is an option for Tottenham but I think Pochettino will stick with Christian Eriksen in a deeper midfield role alongside Moussa Sissoko – who’ll be looking to bounce back from his disappointing miss against Liverpool at the weekend.

Attack: Harry Kane is certain to keep his place up front with the England international looking to boost his Golden Boot chances having scored three goals in his last five Premier League matches.

Dele Alli is back to full fitness and he should once again start in attack for Tottenham while Lucas Moura will be hoping he’s done enough to keep his place after scoring the equaliser at Anfield last time out.

However, I think Pochettino will recall Hueng-min Son to the starting eleven against Crystal Palace tomorrow night meaning Moura may have to make-do with a place on the bench.

Tottenham won’t have too many experienced attacking options among the subs as Erik Lamela has been ruled out with a hamstring injury while Fernando Llorente is out with concussion. 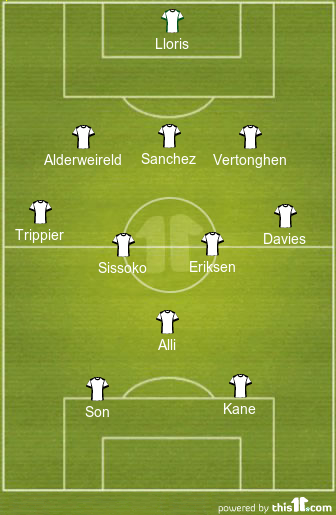