Arsenal’s top four hopes have taken a huge blow after we slumped to a hugely disappointing 1-0 defeat to Everton at Goodison Park this afternoon. 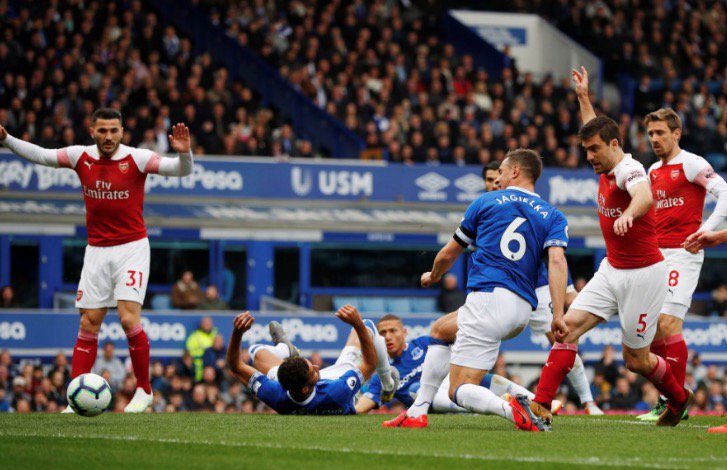 Arsenal’s top four hopes have taken a huge blow after we slumped to a hugely disappointing 1-0 defeat to Everton at Goodison Park this afternoon.

Arsenal could have had an early penalty when Alexandre Lacazette was fouled by Kurt Zouma in the box but the referee failed to give it and Everton took full advantage by opening the scoring minutes later.

We failed to deal with a long throw from Lucas Digne with Shkodran Mustafi and Mohamed Elneny both failing to get a head on it and Phil Jagielka tapped home at the far post to make it 1-0 in the 10th minute after the ball deflected off Sead Kolasinac.

Arsenal struggled to respond as Everton dominated the rest of the opening forty-five minutes. We improved when Aaron Ramsey and Pierre-Emerick Aubameyang came on at the break with the Welshman missing a good chance to equalise early in the second half.

However, Everton were the side who created the better chances with Richarlison missing the pick of the opportunities to add to their lead as the hosts eased to a 1-0 win.

The defeat leaves Arsenal sitting fourth in the table – level on points with Chelsea – with six matches remaining so we’re in a real battle to qualify for the Champions League next season.