Arsenal take on Napoli at the Emirates in the first leg of our Europa League quarter-final on Thursday. Here is the side we think Unai Emery will select

Arsenal will be looking to secure a first leg lead in our Europa League quarter-final with Napoli at the Emirates on Thursday night. Here is the side Gooner Mac thinks Unai Emery will select for the game:

Goalkeeper: Bernd Leno has been in fine form in the Premier League recently but Emery has stuck with Petr Cech throughout the Europa League campaign so I expect the veteran Czech star to be recalled tomorrow night.

Defence: Arsenal will hand a late fitness test to Laurent Koscielny after he missed the last two matches with a foot injury. The Frenchman will be assessed on Thursday morning after taking part in full training today but as long as he doesn’t suffer any reaction, Koscielny will be available for the game.

Sokratis returns from a European suspension and with the Greek international now facing a two-match domestic ban, he’s certain to start against Napoli while Nacho Monreal should continue on the left of a back three. Therefore, if Koscielny is recalled, Shkodran Mustafi is likely to be the man to make way.

Midfield: Granit Xhaka also returned to training today after recovering from a groin injury and he’ll be checked over by the medical team before his availability is determined. However, we sorely missed Xhaka during the defeat at Everton and I expect him to return to the Arsenal eleven on Thursday night.

Aaron Ramsey is also pushing for a recall after not being risked from the start at Goodison Park. He’s been in great form lately so I wouldn’t be surprised to see him line-up alongside Xhaka in the middle of the park.

Lucas Torreira is another option if Arsenal want to play more conservatively but we need to win at home tomorrow so Emery may go with the more attack-minded Ramsey. Matteo Guendouzi is likely to drop to the bench along with Mohamed Elneny.

Sead Kolasinac had a poor game at Everton but he’s still expected to retain his place in the left wing-back role while Ainsley Maitland-Niles should once again start on the opposite flank.

Attack: Pierre-Emerick Aubameyang is pushing for a recall up front after only being named on the bench for the last two games due to a virus. We need goals tomorrow night to put us in control ahead of the second leg so I think Arsenal will be bold and play Aubameyang in attack along with Alexandre Lacazette.

The duo will probably play as a front two when we’re in possession with Auba dropping out to the wing when we don’t have the ball but Emery will want their goal threat to try and secure a first leg lead given our poor away form.

Mesut Ozil was enjoying some fine form before having a stinker against Everton on Sunday and I wouldn’t be surprised to see him drop to the bench against Napoli – especially if we go with Aubameyang and Lacazette up front.

Emery will want at least one hard working forward in his eleven so he may opt for Alex Iwobi or Henrikh Mkhitaryan ahead of Ozil against a dangerous Napoli side. 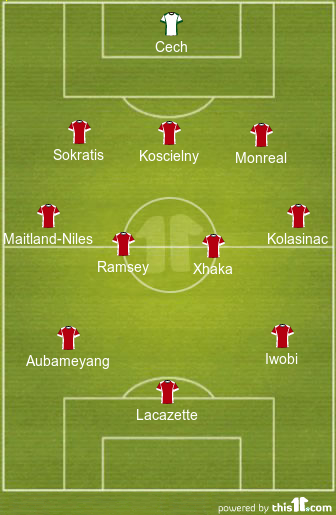