Liverpool take on Chelsea at Anfield on Sunday afternoon. Here is the team we think Jurgen Klopp will select:

Liverpool will be looking to cement their place at the top of the Premier League table with a win over Chelsea at Anfield on Sunday afternoon. Here is the team we think Jurgen Klopp will select:

Goalkeeper: There is no debate over who’ll start in goal as Alisson Becker is certain to retain his place between the sticks against Chelsea. Simon Mignolet will therefore have to make-do with a place on the bench once again.

Defence: Liverpool will be boosted by the return of Andrew Robertson as he’s back in contention after being suspended for the Champions League win over Porto in midweek. James Milner deputised at left-back against the Portuguese giants but he’ll be free to move back into a midfield role tomorrow.

Trent Alexander-Arnold should continue at right-back but Joel Matip could be in-line for a recall alongside Virgil van Dijk in the middle of the back four. He was rested against Porto on Tuesday night so Dejan Lovren may make way against Chelsea.

Joe Gomez has been stepping up his return from a fractured leg recently but Klopp says he wants to ease the youngster back into first team action so he’s not expected to be involved tomorrow.

Midfield: Liverpool are expected to make at least one change in midfield as Georginio Wijnaldum is pushing for a recall after being rested against Porto in the Champions League.

Naby Keita has been showing something like his best form in recent weeks but he may drop to the bench against Chelsea with Jordan Henderson keeping his place after an excellent performance in midweek.

Fabinho could start in the holding role for Liverpool which means James Milner may have to make-do with a place among the substitutes and he could be joined by Adam Lallana if he passes a late fitness test on a muscle problem which kept him out of the Porto game.

Alex Oxlade-Chamberlain has been edging closer to full fitness in training recently as he looks to return from a year-long absence but the midfielder is unlikely to be involved against Chelsea.

Attack: Liverpool are in a comfortable position in their Champions League tie with Porto and they desperately need three points tomorrow to stay clear of Manchester City in the Premier League so I don’t expect Klopp to rest any of his big-guns.

Roberto Firmino put-in an excellent performance in midweek and the Brazilian international should once again lead the line up front with Mohamed Salah and Sadio Mane offering support from the wings.

That means the likes of Daniel Sturridge, Divock Origi and Xherdan Shaqiri will have to battle for places on the bench. 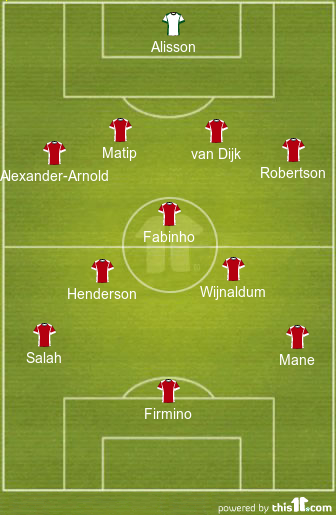