Arsenal need a win over Watford at Vicarage Road this evening. Here is the side Gooner Mac thinks Unai Emery will select for the game:

Arsenal will be looking to climb back into the top four with a win over Watford at Vicarage Road this evening. Here is the side Gooner Mac thinks Unai Emery will select for the game:

Goalkeeper: Petr Cech kept a clean sheet during Arsenal’s Europa League victory over Napoli last week and will keep goal once again for the Europa League quarter-final second leg on Thursday night. However, number one Bernd Leno will be recalled at Watford this evening.

Defence: Arsenal will be without Sokratis as the Greek international will start a two-match domestic suspension after collecting 10 yellow cards so Shkodran Mustafi is in-line for a recall to the back three.

Emery would ideally like to rest Laurent Koscielny ahead of the Napoli game as he may struggle to play three lots of 90 minutes inside a week having just returned from a foot injury but we need a win at Watford tonight so I think the Frenchman will start. Nacho Monreal should also keep his place in the left side of the defence.

Midfield: Granit Xhaka will be handed a late fitness test after missing the last three matches with a groin injury that he sustained during the international break. With a huge trip to Napoli coming up, I don’t think Emery will risk Xhaka from the start tonight so I expect him to be named on the bench at best.

Aaron Ramsey was outstanding against Napoli last time out and fully deserves to keep his place in the team and I think he struck up an excellent partnership with Lucas Torreira in the middle of the park. It’s a shame they won’t have the opportunity to make it a long-term thing with Ramsey leaving in the summer but for as long as the Welshman is still around he should play and Torreira is a great foil for him.

Matteo Guendouzi is an option if the Arsenal boss wants to freshen things up while Mohamed Elneny is also pushing for a recall but think we’ll see Ramsey alongside Torreira again tonight.

I also don’t think we’ll see any changes in the wing-back positions as Sead Kolasinac is expected to continue on the left with Ainsley Maitland-Niles keeping his place on the right following an excellent performance during Arsenal’s win over Napoli.

Attack: Arsenal may decide to go with just one striker up front away to Watford and Pierre-Emerick Aubameyang should be fresh as he’s only just returned to the starting eleven after being benched due to illness.

Alexandre Lacazette may therefore be rested for the Napoli trip with Alex Iwobi coming in to the attack. Mesut Ozil  put-in an excellent display in the Europa League win on Thursday night so we could see him keep his place in the Arsenal line-up.

Henrikh Mkhitaryan is an option if Emery decides to give Ozil a breather ahead of our trip to Italy while Denis Suarez will also be hoping to get some game-time this evening following a disappointing loan spell so far. 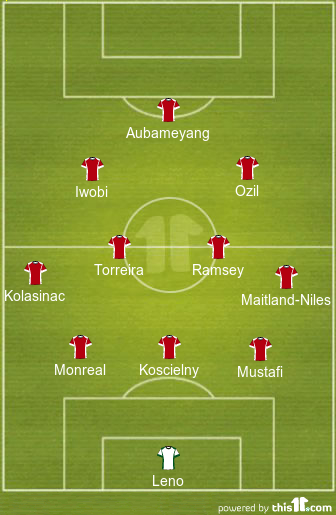