Arsenal take on Crystal Palace at the Emirates on Sunday afternoon. Here is the side Gooner Mac thinks Unai Emery will select for the game:

Arsenal can move up to third in the Premier League table with a win over Crystal Palace at the Emirates on Sunday afternoon. Here is the side Gooner Mac thinks Unai Emery will select for the game:

Goalkeeper: Petr Cech kept goal for both legs of our Europa League quarter-final win over Napoli and didn’t concede a single goal but the ageing Czech legend will still drop to the bench against Palace with Bernd Leno recalled.

Defence: Arsenal will be without Sokratis as he completes a two-match domestic suspension. Dinos Mavropanos is an option for Emery after helping the Gunners keep a clean sheet during the win at Watford last week.

However, I think we’ll see Shkodran Mustafi recalled with the German international joining Laurent Koscielny and Nacho Monreal in the Arsenal back three tomorrow afternoon.

Midfield: Granit Xhaka will be assessed by the Arsenal medical team ahead of the game due to a minor hip injury that he suffered against Napoli but I expect he’ll be passed fit to keep his place in the middle of the park this weekend.

Lucas Torreira could be given a rest as the Uruguayan international has been carrying a groin problem in recent games and Emery will want him fully fit for the trip to Wolves on Wednesday night.

If Torreira is rested then we should see Matteo Guendouzi recalled in midfield against Palace as the youngster is ahead of Mohamed Elneny in Emery’s pecking order.

Sead Kolasinac and Ainsley Maitland-Niles put-in solid performances in Naples and they will keep their places in the wing-back positions if Arsenal persist with a 3-4-1-2 formation.

Attack: Aaron Ramsey has been ruled out after suffering a hamstring injury against Napoli on Thursday night so Emery will be forced to make at least one change in attack as the Welshman was deployed in the advanced attacking midfield role to good effect.

Mesut Ozil is the obvious choice as he was named on the bench at the Stadio San Paolo so I expect he’ll be recalled to start in the No.10 role if Emery opts to deploy two strikers. If not, then Ozil should be one of the two attacking midfielders tomorrow.

Alexandre Lacazette scored a stunning free-kick late in the first half to settle the Europa League tie against Napoli so the Frenchman certainly deserves to keep his place up front.

Pierre-Emerick Aubameyang didn’t have a great game in Italy after missing a sitter but he netted the winner at Watford last time out in the Premier League. I think Emery will stick with his two strikers at home to Palace before leaving one of them out away to Wolves in midweek.

That means Henrikh Mkhitaryan and Alex Iwobi may have to settle for places on the Arsenal bench but Denis Suarez is expected to miss out once again due to a niggling groin injury. 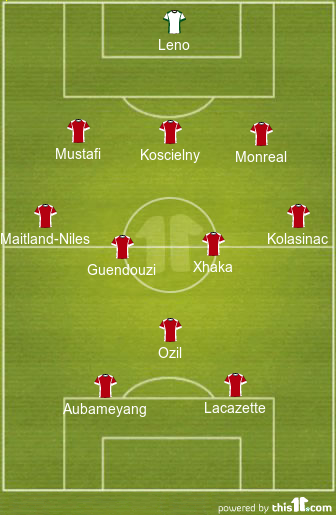