Chelsea will be looking to go third in the table with a win over Burnley at Stamford Bridge on Monday night. Here is the side I think Sarri will select

Chelsea will be looking to go third in the table with a win over Burnley at Stamford Bridge on Monday night. Here is the side I think Maurizio Sarri will select for the game:

Goalkeeper: I don’t think there can be too many doubts over who’ll start in goal as Kepa Arrizabalaga will retain his place ahead of Willy Caballero tomorrow night.

Defence: Chelsea will once again be without Antonio Rudiger as he’s still nursing a knee injury that kept him out of the Europa League win over Slavia Prague on Thursday night so Andreas Christensen should continue alongside David Luiz in the middle of the back four.

Cesar Azpilicueta is almost certain to start once again at right-back but Marcos Alonso could be recalled in place of Emerson Palmeiri at left-back if he passes a late fitness test on a minor injury.

Midfield: Chelsea rested Jorginho against Prague last time out so the Italian international is in-line for a recall in the deep-lying playmaker role tomorrow night. N’Golo Kante is expected to keep his place while Ruben Loftus-Cheek is pushing for a recall to the squad after being rested in the Europa League.

The England international has been in fine form for Chelsea lately so he may get the nod with Ross Barkley and Mateo Kovacic dropping to the bench against Burnley.

Attack: Chelsea star Eden Hazard is expected to be fit despite picking up a minor ankle problem against Prague last Thursday night. Sarri may be tempted to rest him ahead of next weekend’s huge clash with Manchester United but Chelsea need to ensure they beat Burnley to boost their top four hopes so I think Hazard will start tomorrow.

Olivier Giroud played well against Prague and may be Chelsea’s first choice striker right now so he could be given a breather ahead of the United game with Gonzalo Higuain recalled to lead the attack against Burnley.

Pedro will be hoping he did enough to keep his place with a brace last time out but Sarri may want to keep him fresh for the Man Utd trip. Willian is pushing for a recall but the Chelsea boss could recall Callum Hudson-Odoi after he was rested on Thursday. The teenager has been seeing more first team football in recent weeks and has been impressing so he may be given another chance against Burnley. 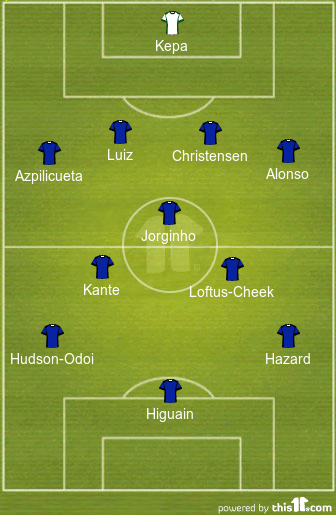