Tottenham will be looking to cement their place in the top four with a win over Brighton this evening. Here is the side we think Pochettino will select

Tottenham will be looking to cement their place in the top four with a win over Brighton at the New Tottenham Hotspur Stadium this evening. Here is the side we think Mauricio Pochettino will select for the game:

Goalkeeper: Hugo Lloris is expected to return in goal after the Frenchman was ruled out of Saturday’s defeat at Manchester City with a minor muscle problem. Paolo Gazzaniga will therefore drop back to the bench tonight.

Defence: Pochettino is also set to recall Keiran Trippier at right-back with the Tottenham boss switching to a back four having played with wing-backs at the Etihad Stadium at the weekend. Juan Foyth did well in the unfamiliar position but the young defender is likely to make way tonight with Trippier coming back in.

Danny Rose is expected to replace Ben Davies on the left side of the defence while Davinson Sanchez is the man most likely to drop out if Pochettino switches formation to deploy a flat back four with Toby Alderweireld and Jan Vertonghen keeping their places.

Midfield: Tottenham will be without Moussa Sissoko as he continues to nurse a groin injury that he sustained while playing against Man City in the Champions League last week. Eric Dier has returned to full fitness lately so he should keep his place in the middle of the park.

Harry Winks remains a doubt with a groin problem that kept him out of the trip to City on Saturday so we could see Victor Wanyama being given a recall against Brighton this evening after the Kenyan international was benched last time out.

Attack: Tottenham will continue to be without the services of Harry Kane as he’s still working his way back to full fitness following another ankle ligament injury. Fernando Llorente is pushing to start up front but I think it’s likely that Hueng-min Son will lead the line for Spurs tonight.

Lucas Moura should retain his place in the Tottenham attack alongside Son as he’s been in great form lately having bagged an impressive hat-trick during the win over Huddersfield last weekend.

Christian Eriksen is also expected to start once again for the north Londoners while Dele Alli will complete the attack with the England international lining-up along with Eriksen, Moura and Son.

Erik Lamela remains out with an on-going hamstring injury so Tottenham won’t have too many experienced attackers available form the bench but their starting eleven should still have more than enough quality to beat Brighton at home. 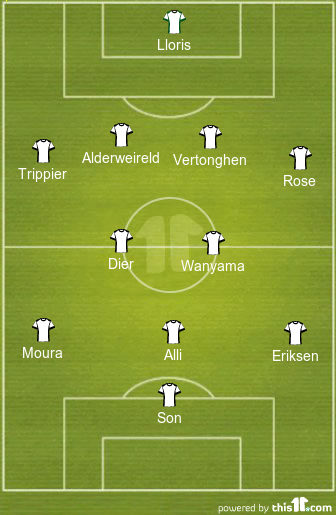