Tottenham take on West Ham at the New Tottenham Hotspur Stadium on Saturday. Here is the side we think Mauricio Pochettino will select for the game:

Tottenham will be looking to cement their place in the top four with a win over West Ham at the New Tottenham Hotspur Stadium on Saturday lunchtime. Here is the side we think Mauricio Pochettino will select for the game:

Goalkeeper: Hugo Lloris is set to keep goal once again despite some inconsistent form of late so Paolo Gazzaniga will continue on the bench.

Defence: Pochettino went with a back four against Brighton last time out and he’s expected to stick with that system tomorrow afternoon. Davinson Sanchez and Juan Foyth are pushing for recalls but West Ham are a dangerous side so Pochettino is likely to go with his preferred partnership of Toby Alderweireld and Jan Vertonghen in the middle of defence.

Serge Aurier remains on the sidelines with a hamstring injury so Kieran Trippier should continue at right-back but Spurs might freshen things up on the left with Ben Davies coming in for Danny Rose.

Midfield: Tottenham will continue to be without Moussa Sissoko as he’s ruled out with a groin injury that kept him out of the 1-0 win over Brighton while Harry Winks is also still on the sidelines with his own groin complain.

However, Eric Dier is pushing for a recall in midfield after being rested on Tuesday night so the England international could come in alongside Victor Wanyama in the middle of the Tottenham midfield.

Attack: Pochettino can’t afford to think ahead to next weeks huge Champions League semi-final with Ajax as they remain in a fight for the top four in the Premier League so the Tottenham boss is expected to resist the temptation to rest any of his key men.

Harry Kane is still working his way back to full fitness following an ankle ligament injury and Fernando Llorente lead the line up front against Brighton earlier this week. However, I think we could see the Spaniard dropping out with Hueng-min Son deployed in a central striking role against West Ham.

Erik Lamela remains on the sidelines with a hamstring injury so Lucas Moura is expected to keep his place in the Tottenham attack while Dele Alli should also once again start for the north Londoners.

Christian Eriksen scored a priceless late winner against Brighton on Tuesday and the Danish star is almost certain to retain his place in the Tottenham attack this weekend.

Spurs won’t have too many attacking options from the bench so we could see forgotten striker Vincent Janssen named among the substitutes again after he made a rare cameo against Brighton. 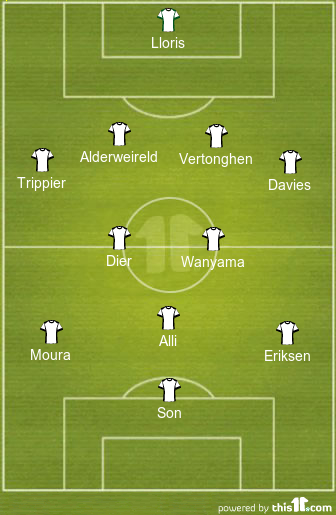