Arsenal take on Leicester City at the King Power on Sunday afternoon. Here is the side Gooner Mac thinks Unai Emery will select for the game:

Arsenal take on Leicester City at the King Power on Sunday afternoon. Here is the side Gooner Mac thinks Unai Emery will select for the game:

Goalkeeper: Bernd Leno will have been hugely disappointed with his performance in midweek as he was at fault for two of Wolves’ goals but it was a rare off-day from the German and he’ll keep his place between the sticks on Sunday.

Defence: Arsenal went with a back four against Wolves in midweek but it didn’t work as we were all over the place defensively so I wouldn’t be surprised to see Emery reverting to a back three/five this weekend.

Sokratis was back in the side on Wednesday night after completing a two-match suspension but he looked rusty after being partially at fault for two of the goals so hopefully he gets back on form against Leicester. Shkodran Mustafi is pushing for a recall while Dinos Mavropanos is another option but I think Emery will stick with Laurent Koscielny.

Nacho Monreal put-in a rare poor performance last time out and it seems he no longer has the legs to play at left-back. However, he’s still a dependable defender playing on the left side of a back three so I think we’ll see him deployed there on Sunday.

Midfield: The switch in formation would see Sead Kolasinac recalled in the left wing-back role while Ainsley Maitland-Niles will push in to a more familiar right wing-back position having struggled at right-back against Wolves.

Granit Xhaka returned from injury in midweek and he should keep his place in the middle of the park despite his poor performance for Arsenal at Molineux. Matteo Guendouzi hasn’t been playing well lately so I don’t think he’ll be recalled and Mohamed Elneny is not the answer to our problems.

So with Aaron Ramsey still out with a hamstring injury, I think we’ll see Lucas Torreira keeping his place alongside Xhaka in midfield on Sunday afternoon.

Attack: Pierre-Emerick Aubameyang missed the defeat to Wolves after undergoing a minor procedure on a sinus problem but the striker should return to squad for the trip to the King Power this weekend.

Emery has been rotating his strikers throughout the season but Arsenal have looked at their most dangerous when both Aubameyang and Alexandre Lacazette start together up front so hopefully we see them line-up on Sunday.

Mesut Ozil was poor against Wolves, but so were all of his team-mates so it wouldn’t be fair to single him out for rough treatment. I don’t think we look balanced when both Ozil and Henrikh Mkhitaryan start in attack so I’d pick Ozil ahead of the Armenian international.

Alex Iwobi continued to frustrate in midweek as he produced some encouraging moments but his end product was once again poor. I still think he’s best suited to being an impact substitute so I think he’ll drop to the bench this weekend.

Denis Suarez misses out once again through injury as his nightmare loan spell from Barcelona continues so Eddie Nketiah could be on the bench. 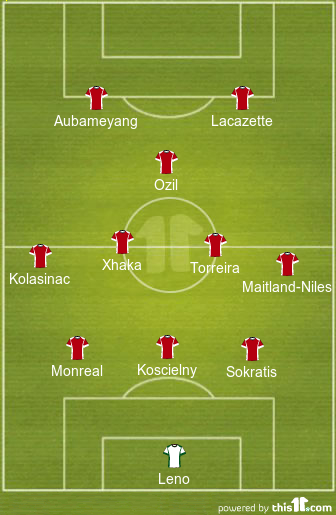