Arsenal have been dealt a fresh injury blow after Denis Suarez confirmed he has been ruled out for the rest of the season with an on-going groin problem. Arsenal have been dealt a fresh injury blow after Denis Suarez confirmed he has been ruled out for the rest of the season with an on-going groin problem.

Suarez joined Arsenal on an initial six month loan deal from Barcelona back in January and he was hoping for a fresh start here in the Premier League having failed to establish himself at the Nou Camp.

A permanent transfer in the summer had been lined-up if the Spaniard impressed during his short spell at the Emirates Stadium, however, his time here in north London has turned out to be a complete nightmare.

The 25-year-old hasn’t made a single start for Arsenal and has played just 95 minutes of competitive football during his six substitute appearances in all competitions.

Suarez has been on the sidelines with a groin injury since featuring against BATE Borisov in our Europa League last-32 tie back in February and the attacking midfielder has been working hard trying to get himself fit to play some part in our run-in.

However, Suarez has now taken to Twitter to release a statement confirming that following a series of consultations, it’s been decided that he can no longer take part in training and will be unable to play again this season. 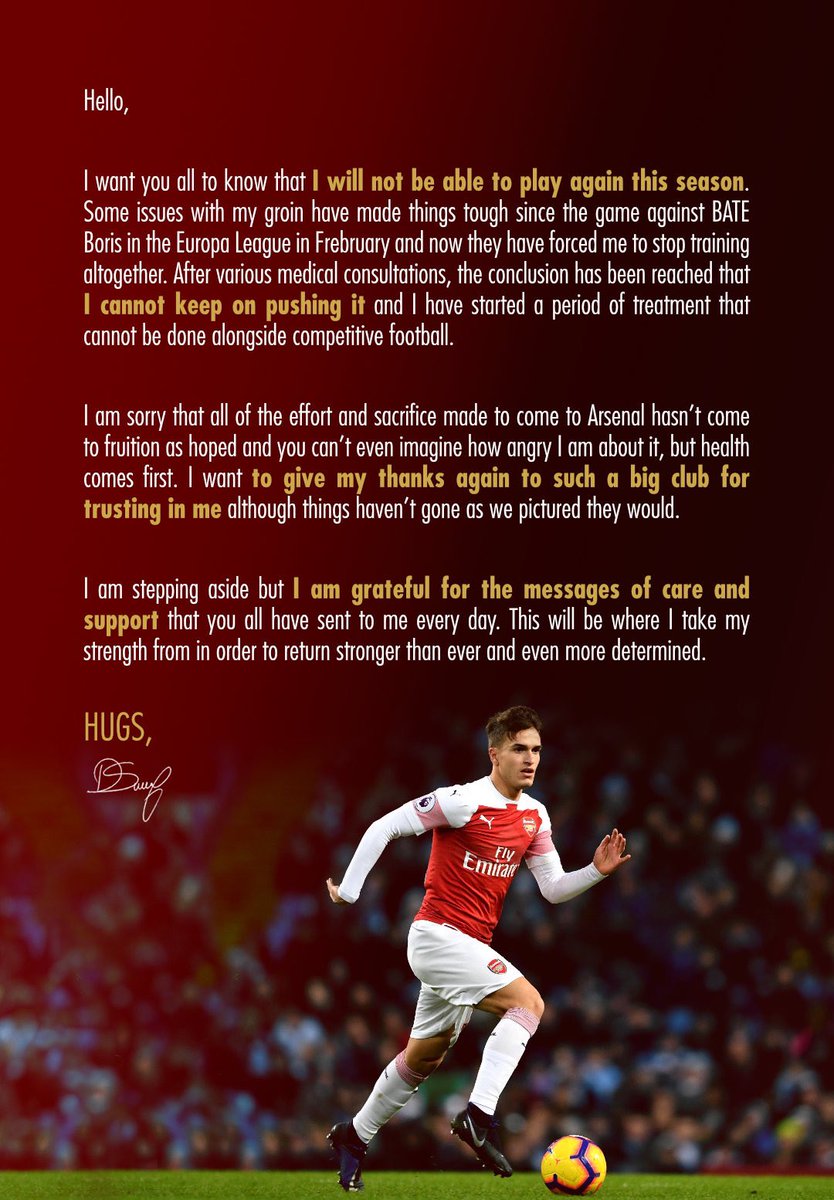 Suarez is now expected to return to Barcelona to undergo his treatment and I think it’s safe to say he won’t be making a permanent transfer to Arsenal this summer following a nightmare loan spell.

Many had hoped Arsenal had pulled off a shrewd move by signing Suarez on loan as he does have bags of potential. However, he just never seemed to settle here in England and I don’t think he has the physical attributes needed to succeed in the Premier League.

The injury will come as a blow to Unai Emery as although Suarez wasn’t a prominent first team player, his absence now further limits our attacking options during the closing games of the season.

Mesut Ozil missed the defeat at Leicester with a foot injury, Aaron Ramsey is out with a hamstring injury while Danny Welbeck won’t play again this season due to a serious ankle injury that’s kept him out since December.

Emery has been forced to call up youngsters Eddie Nketiah and Joe Willock for recent games due to a lack of senior options on the bench and it seems they may play a part during our final matches of the season now that Suarez has been ruled out.