Arsenal take on Brighton at the Emirates on Sunday afternoon. Here is the side Gooner Mac thinks Unai Emery will select for the game:

Arsenal will be looking to keep the pressure on the top four with a win over Brighton at the Emirates on Sunday afternoon. Here is the side Gooner Mac thinks Unai Emery will select for the game:

Goalkeeper: Bernd Leno is set for a recall between the sticks after Petr Cech kept goal in the Europa League semi-final first leg victory over Valencia on Thursday night.

Defence: Arsenal will assess Laurent Koscielny ahead of Sunday’s game after the defender aggravated an Achilles injury during the win over Valencia. The Frenchman wasn’t included in Arsenal’s team news update this afternoon but I think it’s highly unlikely Emery will risk him from the start against Brighton.

Nacho Monreal will therefore come in to start on the left side of a back three after only being named on the bench against Valencia while Sokratis and Shkodran Mustafi should keep their places in defence.

Midfield: Ainsley Maitland-Niles is suspended after being harshly sent off during the defeat at Leicester City last weekend so there is a void to fill in the right wing-back position. Stephan Lichtsteiner is an option but I think Emery may go with the younger legs of Carl Jenkinson while Sead Kolasinac should retain his place in the left wing-back role.

Aaron Ramsey has been ruled out for the rest of the season with a hamstring injury but Lucas Torreira is expected to be recalled after being named among the substitutes during Arsenal’s win over Valencia.

Matteo Guendouzi put-in a decent display against the Spaniard’s but I think he’ll still be the man to make way with Granit Xhaka keeping his place. Mohamed Elneny will once again have to settle for a place on the bench.

Attack: Alexandre Lacazette bagged a brace to help secure our 3-1 win over Valencia and he should keep his place up front but I think Emery may decide to give one of his strikers a rest ahead of the return leg in Spain next week.

Therefore, despite scoring a fine volley last night, Pierre-Emerick Aubameyang may drop to the bench against Brighton to ensure he’s well-rested for the crucial trip to Valencia next Thursday night.

Mesut Ozil put-in a solid showing last time out and as this is a home match, I’d expect the German playmaker to keep his place before possibly dropping to the bench against Valencia next week.

Alex Iwobi could be the man to come in to the front three as I don’t think Arsenal look balanced enough when it’s Henrikh Mkhitaryan alongside Ozil in attack. Denis Suarez has been ruled out for the rest of the season with a groin injury so Eddie Nketiah could be in the squad. 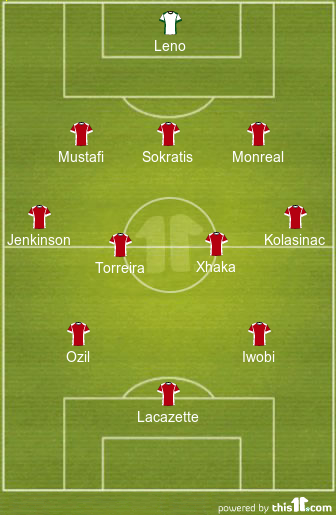