Liverpool will be desperate to reclaim top spot and put the pressure on Manchester City with a win over Newcastle United at St James’ Park this evening.

The Reds currently sit one point behind City with two games remaining after winning their last seven Premier League games in a row so they can’t afford any slip-up against the Magpies.

Victory would see Liverpool go two points clear and put the pressure back on City but defeat at St James’ Park would mean Pep Guardiola’s side could wrap-up the title with a win over Leicester City on Monday.

Liverpool will need to put Wednesday night’s 3-0 Champions League semi-final first leg defeat to Barcelona firmly behind them and they’ll be up against a Newcastle side that sit 13th in the table after securing their top flight status for another season.

Liverpool will need to assess Roberto Firmino as the striker was rushed back from a groin injury to make a substitute appearance against Barcelona. Klopp suggested the South American isn’t fully fit yet so Firmino may have to settle for a place on the bench again today.

One player who’s certain to miss out is Naby Keita as the midfielder has been ruled out for at least two months with a serious groin injury that forced him off in midweek.

Adam Lallana is also still a doubt due to an on-going muscle problem but Alex Oxlade-Chamberlain is in contention again while Trent Alexander-Arnold, Dejan Lovren and Jordan Henderson are pushing for recalls.

Newcastle have been handed a double boost as Ayoze Perez (hip) and Jamaal Lascelles (illness) have been passed fit to start but DeAndre Yedlin misses out with a groin problem. 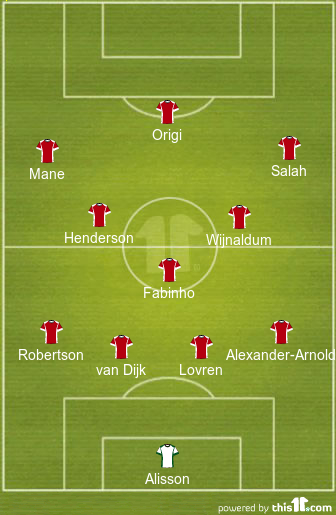 Newcastle 1-2 Liverpool: Newcastle have only lost one of their last seven home league games against Liverpool and they shouldn’t expect any favours from former manager Rafa Benitez this evening. However, the hosts have very little left to play for and Liverpool should be fighting their hearts out for the three points so I think that extra motivation will give them the edge. I’m predicting a narrow 2-1 win to put Liverpool back on top and it would then be over to Man City to respond on Monday night.