Liverpool need to beat Wolves to stand any chance of pipping City to the title on the final day of the season. Here is the team we think Klopp will select

Liverpool need to beat Wolves at Anfield on Sunday afternoon to stand any chance of pipping Manchester City to the Premier League title on the final day of the season. Here is the team we think Jurgen Klopp will select:

Goalkeeper: Alisson Becker has proven to be a superb addition to the Liverpool team since arriving from AS Roma last summer and no doubt the Brazilian international will keep his place between the sticks on Sunday.

Defence: Liverpool are expected to make at least one change in defence with Dejan Lovren pushing for a recall alongside Virgil van Dijk. Joel Matip could therefore be given a breather following an excellent display against Barcelona in midweek.

Joe Gomez is also pushing for a recall but I don’t think Klopp can leave Trent Alexander-Arnold out for this vital game after his huge contribution on Tuesday night. Andrew Robertson will undergo a late fitness check on a calf problem that forced him off at half-time against Barca but Klopp has suggested that the Scotland skipper will be available for selection which would be a huge boost for Liverpool.

Midfield: Jordan Henderson also picked up a knock in midweek after suffering a knee problem during the opening forty-five minutes. The midfielder was able to complete the game but Klopp says Henderson will also need a late fitness test. I don’t think there is such a need to push the England international so I expect Henderson to drop to the bench against Wolves on Sunday.

Fabinho should keep his place in the holding role after another excellent performance on Tuesday night while Georginio Wijnaldum is expected to be recalled after his heroics off the bench in the Champions League.

Naby Keita is out with a groin injury while Adam Lallana is also struggling with an on-going muscle problem but James Milner could keep his place in the middle of the park. Alex Oxlade-Chamberlain should be back in the squad and he’ll be hoping to get some more minutes under his belt as he continues his comeback from a knee injury.

Attack: Liverpool will welcome Mohamed Salah back into the side after he was forced to miss the Barcelona game due to concussion. The Egyptian international trained today so should be fit to start on Sunday which will obviously be a huge boost for the Merseysiders.

Sadio Mane should keep his place in the Liverpool attack so Xherdan Shaqiri will be the man to make way. Roberto Firmino has once again been ruled out with a niggling groin injury so there is a void to fill up front.

Daniel Sturridge is pushing for a recall but Divock Origi is favourite to keep his place after scoring two vital goals during Liverpool’s sensational 4-0 victory over Barcelona in midweek. 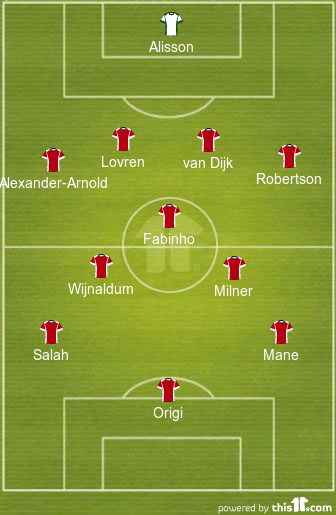