Arsenal have confirmed their 24-man travelling squad which flew out to Azerbaijan ahead of next Wednesday night’s Europa League final against Chelsea. 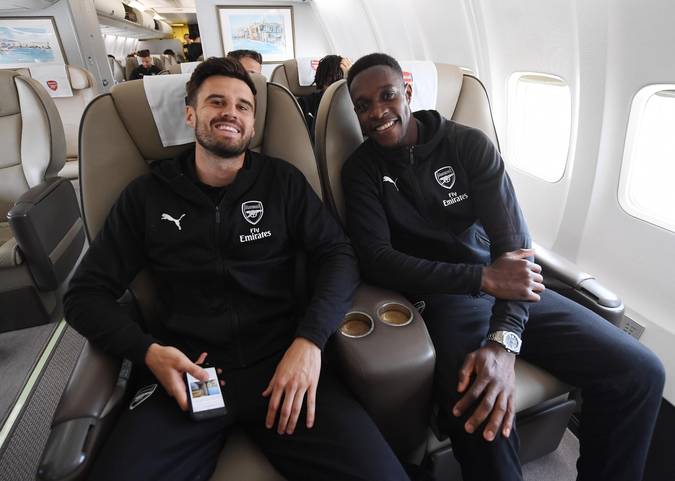 Arsenal have confirmed their 24-man travelling squad which flew out to Azerbaijan today ahead of next Wednesday night’s Europa League final against Chelsea.

The Gunners take on London rivals Chelsea at the Olympic Stadium in Baku looking to lift their first piece of European silverware since 1994 and secure qualification to the Champions League next season.

Danny Welbeck was among the squad which arrived in Azerbaijan this evening with the 28-year-old back in contention after recovering from a broken ankle that’s kept him on the sidelines since November.

Carl Jenkinson has also been included in the 24-man squad and he’ll be hoping to force his way into Unai Emery’s plans at right-back or right wing-back ahead of Ainsley Maitland-Niles and Stephan Lichtsteiner. Obviously Hector Bellerin remains on the sidelines with a knee injury.

Laurent Koscielny will captain the side out against Chelsea next week while fellow defenders Sokratis, Nacho Monreal, Shkodran Mustafi and Sead Kolasinac have also made the trip.

Petr Cech could play his final match as a professional footballer ahead of his retirement this summer – although many Arsenal are calling on Emery to start Bernd Leno amid speculation Cech will take up a role at Chelsea next season.

Mesut Ozil has made the long-haul trip and he’ll be keen to start in the final but it remains to be seen whether Emery will trust the German playmaker having axed him for several big games already this campaign.

Arsenal will be relying on Pierre-Emerick Aubameyang and Alexandre Lacazette to provide the goals if they’re to beat Chelsea next week while Alex Iwobi will also be pushing for a starting place.

Youngsters Eddie Nketiah, Joe Willock, Xavier Amaechi and Bukayo Saka have all been included in the travelling squad but there is obviously no Henrikh Mkhitaryan after he was forced to miss the final due to political tensions between his native Armenia and Azerbaijan.

Emery will name his starting eleven and 12 substitutes 75 minutes before kick off on Wednesday evening. For now, here is the travelling squad as confirmed on Arsenal.com: