Arsenal will look to win the Europa League when they take on Chelsea in Baku on Wednesday night. Here is the side we think Emery will select

Arsenal will look to win the Europa League and book their place in the Champions League next season when they take on Chelsea in Baku on Wednesday night. Here is the side Gooner Mac thinks Unai Emery will select for the game:

Goalkeeper: All eyes will be on Emery to see whether he starts number one goalkeeper Bernd Leno or sticks with Petr Cech. Some fans are demanding Cech is left out amid speculation he’ll re-join our opponents Chelsea as a sporting director when he retires this summer but the 37-year-old has played in each of Arsenal’s last eight Europa League games. Speaking at his press conference today, Emery praised Cech’s professionalism and suggested the experienced keeper deserved to be trusted tomorrow so I think we’ll see Cech starting between the sticks against Chelsea.

Defence: Arsenal are likely to deploy a back three/five once again as that’s the formation Emery has favoured in recent months and we don’t have a reliable right-back who could deal with Eden Hazard. So the Arsenal boss is expected to go with a back three and instruct his right wing-back to help out in keeping Hazard as quiet as possible.

Laurent Koscielny will lead the side out in what could be his final game for the club while Nacho Monreal should start on the left side of the back three. Sokratis is expected to come in on the right meaning Shkodran Mustafi will be the man to miss out.

Stephan Lichtsteiner, Mustafi and Dinos Mavropanos will drop out after starting during the win over Burnley on the final day of the Premier League season.

Midfield: Ainsley Maitland-Niles is expected to start in the right wing-back role while Sead Kolasinac will come in on the left and they will be pivotal in determining our success against Chelsea as they’ll need to help out in defence and provide outlets going forward.

Lucas Torreira is set to partner Granit Xhaka in the middle of midfield meaning Matteo Guendouzi could miss out along with Mohamed Elneny. Aaron Ramsey will be in Baku to support his team mates but he’ll miss the game through injury which is a huge blow.

Attack: Obviously Arsenal will be without Henrikh Mkhitaryan as he’s been forced to miss the game due to safety concerns amid tensions between Armenia and Azerbaijan. It really is a disgrace UEFA have allowed a final to be played in a country where players and fans don’t feel safe and aren’t able to travel to.

With Mkhitaryan out I think we’ll see Emery go with Mesut Ozil in the number 10 role behind Arsenal’s two strikers. Ozil has been heavily criticised at times this season so the pressure is on for him to step up and produce when it matters most.

Pierre-Emerick Aubameyang has been in stunning form lately so he’s certain to start and I think we’ll see him alongside his buddy Alexandre Lacazette up front. If Arsenal are to lift the trophy, I expect we’ll need our strikers to be on top of their game tomorrow.

Alex Iwobi will be an option from the bench while Danny Welbeck could also be named among the substitutes after recovering from a broken ankle that’s kept him out since November. What a story it would be if he was to score the winner off the bench on his last appearance before leaving this summer. 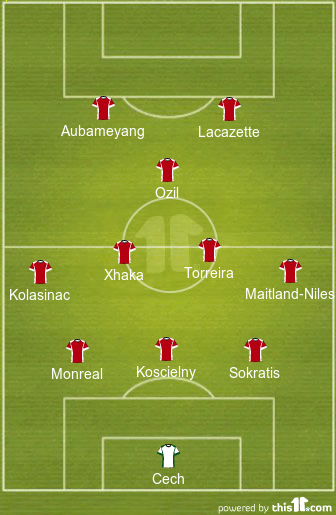