The fixtures for the 2019/20 Premier League campaign have been announced and Arsenal, Tottenham and Chelsea all face tricky starts to the new season.

The fixtures for the 2019/20 Premier League campaign have been announced this morning and Arsenal, Tottenham and Chelsea all face tricky starts to the new season.

Arsenal will be looking to get their season off to a positive start having endured a nightmare end to the last campaign with the Gunners missing out on the top four by one point and losing in the Europa League final to Chelsea.

Unai Emery’s men kick-off the new season with a tough trip to Newcastle United before hosting Burnley in their opening game at the Emirates. Arsenal will then take on European Champions League at Anfield with the first North London Derby taking place the following week when Tottenham travel to the Emirates.

It’s a tough start for the Gunners once again and Emery will be under pressure to hit the ground running this season having lost his opening two games against Man City and Chelsea last year.

Other key dates for Arsenal include Man Utd away on September 28, Man City at home on December 14, back-to-back games against Chelsea and United over Christmas and the return NLD in late April before entertaining Liverpool at the Emirates the following week. 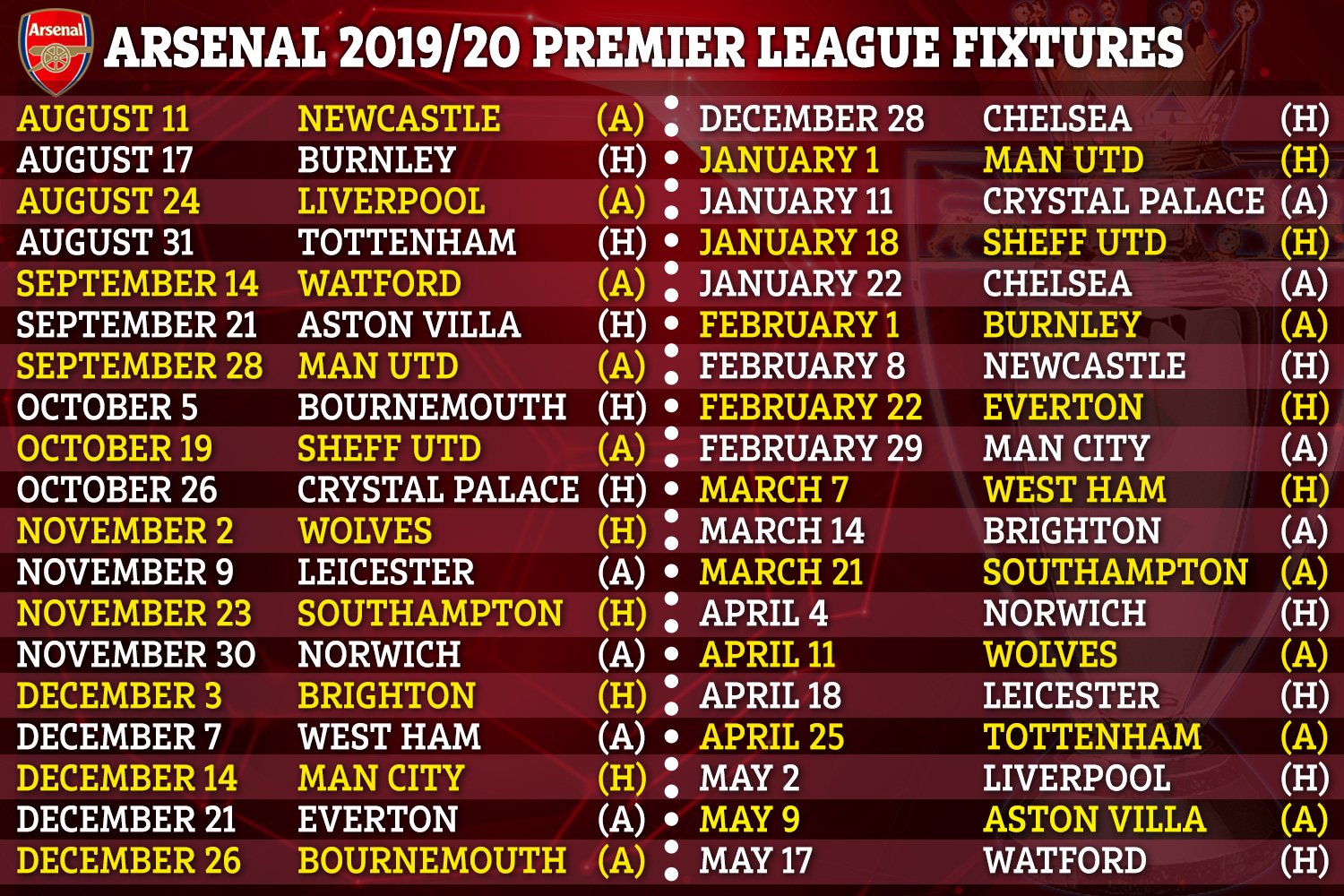 Despite just holding on to a top four spot, Tottenham also finished last season poorly and lost to Liverpool in the Champions League final so Mauricio Pochettino will be hoping his players aren’t still feeling the effects of that heartbreak in Madrid.

Spurs kick-off the new season by hosting newly-promoted Aston Villa at their new stadium before facing a trip to defending champions Manchester City the following weekend.

Tottenham then entertain Newcastle United before the first North London Derby of the new season with Pochettino’s men travelling to the Emirates Stadium on August 31st meaning it’s another tough start for Spurs.

They’ll travel to Anfield in late October, take on Man Utd at Old Trafford on December 3 and entertain Chelsea just before Christmas. February also sees games against Man City and Chelsea while Tottenham finish the campaign away to Palace. 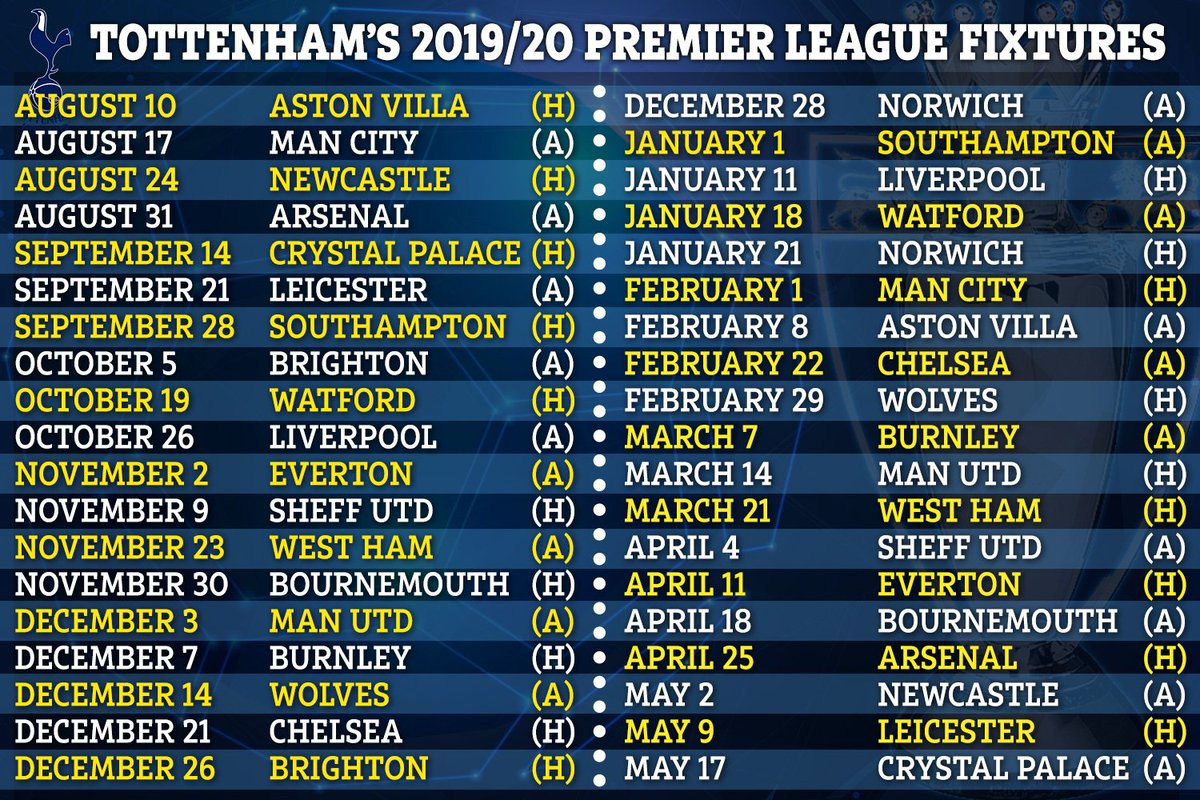 The Blues will be looking to carry the momentum from last season over to the new campaign after Chelsea finished third in the league and won the Europa League with a 4-1 win over Arsenal in Baku.

We may not know for sure who’ll be in charge but Chelsea will open the new season with a difficult trip to Old Trafford to take on Manchester United before further games against Leicester City [H], Norwich City [A] and Sheffield United [H].

Chelsea take on Liverpool at Stamford Bridge on September 21, travel to Man City in late November and face a trip to Tottenham shortly before Christmas. The Blues also take on Arsenal at the Emirates on December 28 before wrapping-up the season at home to Wolves. 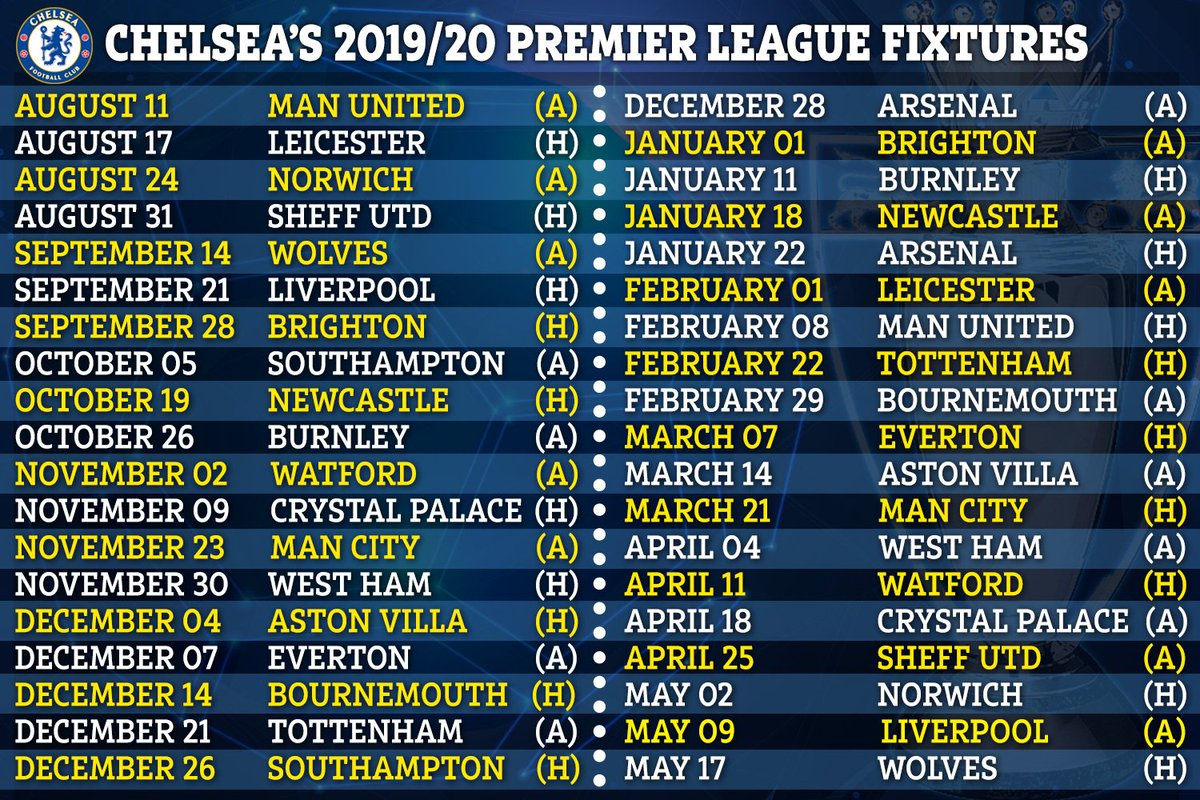