Managers are working hard trying to strengthen their squads during the summer transfer window so we’ll bring you all the latest news and gossip from around the globe. Today, Hakim Ziyech could be heading to the Premier League… 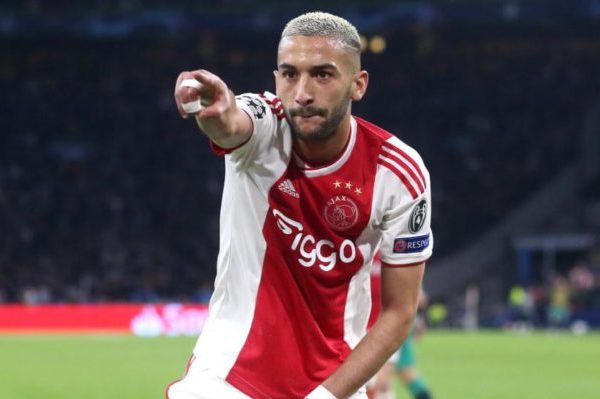 Arsenal and Liverpool have been given the green light to sign Hakim Ziyech with Ajax ready to cash-in on the attacker if £31m is put on the table this summer, according to reports in Holland via the Mirror.

Ziyech has developed into one of the most exciting players in Dutch football since joining Ajax from FC Twente three years ago and he caught the eye of several European clubs after playing a starring role for the club last season.

The Moroccan international contributed 21 goals and 24 assists in 49 appearances to help Ajax win a domestic league and cup double while they also reached the semi-finals of the Champions League before eventually crashing out to a last minute goal against Tottenham.

Ziyech is now being tipped to follow the likes of Frenkie de Jong and Matthijs de Ligt out the exit door this summer and the Mirror are citing a report from Dutch newspaper De Telegraaf as claiming the attacker could be heading to England.

The report says both Arsenal and Liverpool are showing a keen interest in signing Ziyech but they’ll face competition as clubs in Germany and Spain are also reportedly in the race for his signature.

Ajax director of football Marc Overmars confirmed last month that he expects Ziyech to leave this summer and the newspaper suggests the Dutch champions are ready to do business if £31m [€35m] is put on the table.

That sort of money seems reasonable for a player of his ability in today’s over-inflated market but we’ll have to wait and see whether Arsenal or Liverpool formalise their interest with a firm offer over the coming weeks.

However, it seems Ziyech would be open to the idea of moving to north London in particular if Arsenal did agree a deal for his services as the attacker has previously suggested it’s his ‘dream’ to play for Arsenal or Barcelona.

Ziyech is quoted by the Mirror as saying back in 2017:

“Well, I have two clubs. They are Arsenal and Barcelona . That is my ultimate dream,”

Unai Emery is looking to revamp his ageing squad this summer and the Arsenal boss needs to add some width to his ranks so Ziyech – who operates from the right side of attack – could be viewed as a replacement for Danny Welbeck after he left on a free transfer.

However, Jurgen Klopp is also expected to dip into the market for reinforcements and the Liverpool boss could see Ziyech as the man to offer support for the likes of Mohamed Salah and Sadio Mane next season.