Managers are working hard trying to strengthen their squads during the summer transfer window so we’ll bring you all the latest news and gossip from around the globe. Today, Arsenal are closing in on Kieran Tierney….

Arsenal are closing in on a deal to sign Kieran Tierney after submitting an improved offer worth £20m up front plus £5m in add-ons for the Celtic left-back, according to the Sunday Post via The Sun.

Unai Emery is looking to strengthen his defence this summer after we conceded 70 across all competitions last season and it appears Tierney has been identified as a prime transfer target as he’s been strongly linked with a move to the Emirates in recent weeks.

Nacho Monreal spent much of last season playing in a back three while Sead Kolasinac was a real outlet going forward when deployed as a wing-back but neither player looked comfortable defensively at left-back.

Therefore, Emery needs to bring in a top class defender who can play both left-back and wing-back and Tierney has emerged as his prime target after developing into one of the best players in Scottish football since breaking into the Celtic first team four years ago.

Having already seen an opening £15m offer rejected by Celtic, Football Scotland claimed late last week that Arsenal’s second offer worth £17.5m plus £7.5m in add-ons was also knocked back by the SPL Champions. 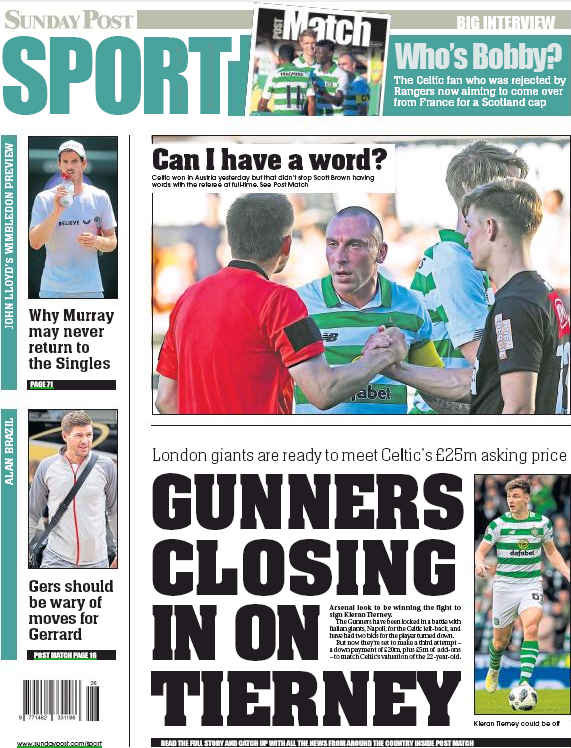 However, it looks like Emery is determined to get his man as the Sunday Post, via The Sun, claims Arsenal have now tabled a third offer worth £20m up front and £5m in add-ons which is now being considered by Celtic chiefs.

The Scottish publication says Arsenal are willing to add Carl Jenkinson to sweeten the deal further while Tierney has now returned to the UK after being released from Celtic’s pre-season training camp in Austria.

Some reports suggest the 22-year-old has flown back to complete his move to Arsenal but The Sun says Celtic boss Neil Lennon insists the full-back has only returned to Glasgow to continue his rehab from a hernia operation.

We’ll have to wait and see whether that’s just a smoke screen but it does seem like Arsenal are closing in on a deal to sign Tierney and it should only be a matter of time before he completes a move to North London.