Managers are working hard trying to strengthen their squads during the summer transfer window so we’ll bring you all the latest news and gossip from around the globe. Here, the latest on Bruno Fernandes’ proposed move to Man Utd…

Sporting Lisbon midfielder Bruno Fernandes has his heart set on joining Manchester United and expects a move to eventually to through this summer, according to reports in Portugal via the Daily Star.

Ole Gunnar Solskjaer has already splashed out on winger Daniel James and right-back Aaron Wan-Bissaka this summer but the United boss is expected to bring-in several more new additions after finishing sixth in the league last season.

The Norwegian coach is looking to overhaul his midfield as Marouane Fellaini left for China in the winter, Ander Herrera has joined PSG while Paul Pogba continues to be strongly linked with a move away from Old Trafford.

Fernandes has been touted as a prime target in recent months and the Mirror reported last week that his agent, Miguel Pinho, was due in England to finalise a deal after agreeing personal terms with Man Utd over the phone.

The newspaper said United were prepared to pay around £31m for Fernandes’ signature but that fell well short of Sporting Lisbon’s £53m asking price so a deal has been at deadlock with the two clubs unable to settle on a fee. 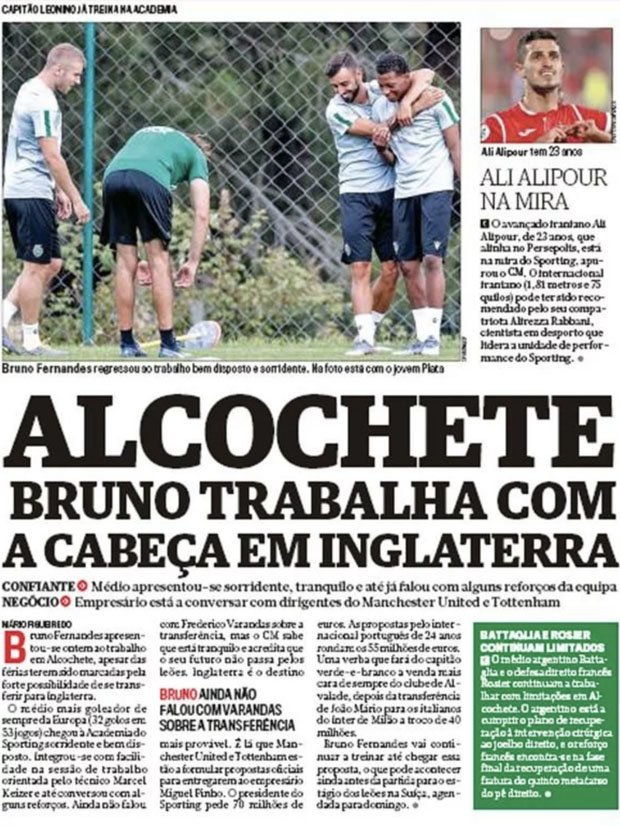 However, the Daily Star are citing a report from Portuguese newspaper Correio da Manha [above] that claims Fernandes has his heart set on joining Man Utd and is relaxed about the move as he feels a deal will eventually be agreed.

The report says United are yet to make a formal offer but a proposal is being prepared and Fernandes fully expects to become a Manchester United player before the start of the new Premier League season.

The Portuguese international would be an exciting addition to Solskjaer’s squad if he does end up moving to Old Trafford as he contributed a staggering 32 goals and 18 assists in all competitions last season.

United could certainly do with adding that sort of creativity to their midfield, especially if Pogba does leave, so I’m sure Solskjaer will be desperate to get this proposed deal over the line as swiftly as possible.