Chelsea take on Norwich City at Carrow Road on Saturday afternoon. Here is the team we expect Frank Lampard to select for the game:

Goalkeeper: I don’t think there is any point deliberating for too long over who’ll start in goal for Chelsea as Kepa Arrizabalaga is certain to keep his place between the sticks with Willy Caballero on the bench.

Defence: Antonio Rudiger is set to return to the squad after getting another full weeks training under his belt having recovered from a serious knee injury. Ideally, Lampard may have wanted to ease him into action but Chelsea’s defence has been poor so far this season so the Blues boss may decide to rush Rudiger back and start him on Saturday.

Kurt Zouma is the man most likely to make way as his form has been inconsistent in the opening few games of the season so Andreas Christensen could line-up alongside Rudiger at Carrow Road this weekend.

Davide Zappacosta has secured a move back to Italy so Cesar Azpilicueta will continue at right-back while Emerson seems to be Lampard’s first choice ahead of Marcos Alonso at left-back.

Midfield: N’Golo Kante is certain to keep his place in the Chelsea midfield and the French international is expected to be joined by Jorginho once again. The duo could form a double-pivot in front of the back four meaning Mateo Kovacic is likely to miss out on a place in the starting eleven against Norwich.

Ruben Loftus-Cheek is still out with a long-term Achilles injury but it appears Mason Mount is Lampard’s favourited option in the attacking midfield position. The youngster has impressed so far this season and scored the opening goal against Leicester last week so I think we’ll see him keep his place with Ross Barkley having to make-do with a place among the substitutes once again.

Attack: Olivier Giroud didn’t really take his chance against Leicester so Lampard may opt to freshen things up with Tammy Abraham recalled in attack. The England Under-21 international has endured a frustrating campaign so far so he’ll be desperate to open his account against Norwich if selected.

Christian Pulisic is expected to keep his place on the left side of attack while Pedro has been Lampard’s preferred option on the right. Willian is pushing for a recall but I think Pedro will keep his place alongside Pulisic and Abraham. 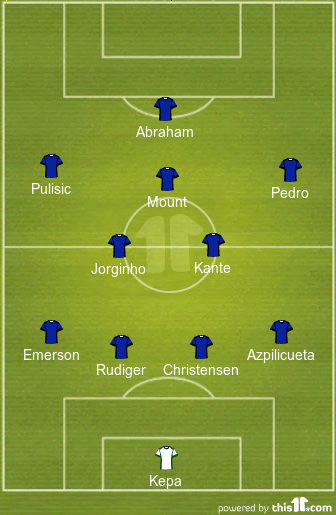