Chelsea take on Wolves at Molineux on Saturday afternoon. Here is the team we expect Frank Lampard to select for the game:

Premier League football returns this weekend as Chelsea take on Wolves at Molineux on Saturday afternoon. Here is the team we expect Frank Lampard to select for the game:

Goalkeeper: I don’t think there is any point spending too long debating over who’ll start in goal for Chelsea as Kepa Arrizabalaga is certain to keep his place between the sticks with Willy Caballero on the bench once again.

Defence: Lampard is set to be handed a major boost with Antonio Rudiger back in contention after recovering from injury and building-up his fitness during the international break so he could make his first appearance of the season.

Andreas Christensen is also set for a recall after being named among the substitutes during the disappointing 2-2 draw with Sheffield United so Kurt Zouma and Fikayo Tomori could drop out against Wolves.

Reece James is close to making his return from an ankle injury but he’s still not available meaning Cesar Azpilicueta will continue at right-back. Emerson is a major doubt with a thigh injury so Marcos Alonso could come in at left-back.

Midfield: N’Golo Kante is set to return after recovering from a foot injury that’s kept him out of Chelsea’s last two matches. The midfielder was given time to recover during the international break so his return will be a major boost for Lampard.

Jorginho will keep his place in midfield with Mateo Kovacic a doubt for the trip to Wolves with a calf injury. Mason Mount has enjoyed a sensational start to the season so the youngster should keep his place in the advanced midfield role this weekend.

Attack: Tammy Abraham continued his fine goal-scoring form with a brace against Sheffield United last time out so he should keep his place up front with Olivier Giroud having to settle for a place among the substitutes.

Christian Pulisic is expected to keep his place in attack but Ross Barkley may drop to the bench with Willian recalled. Pedro missed the Sheffield United game with a thigh injury and it remains to be seen whether he’ll be fit to return on Saturday.

Callum Hudson Odoi is close to making his return from injury after resuming training but this game will come too soon so he remains out with long-term absentee Ruben Loftus-Cheek. 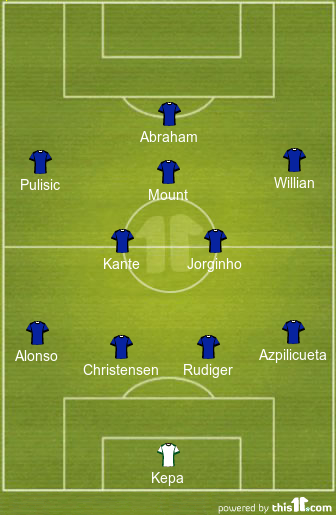