Manchester United take on Astana at Old Trafford on Thursday night. Here is the team we think Ole Gunnar Solskjaer will select:

Manchester United kick off their Europa League group stage campaign against Astana at Old Trafford on Thursday night. Here is the team we think Ole Gunnar Solskjaer will select:

Goalkeeper: The Man Utd boss confirmed at his pre-match press conference this afternoon that Sergio Romero will start in goal so David De Gea will be rested tomorrow.

Defence: Solskjaer is also set to make wholesale changes to his defence with Axel Tuanzebe a confirmed starter. The youngster could be joined by Phil Jones in the middle of the back four with Victor Lindelof and Harry Maguire both given a breather.

Luke Shaw remains on the sidelines through injury so Ashley Young is likely to be protected ahead of Sunday’s Premier League clash with West Ham. Marcos Rojo could therefore get a rare start at left-back. Diogo Dalot is available again after returning to full fitness so he could start at right-back with Aaron Wan-Bissaka given a rest.

Midfield: Man Utd will once again be without the services of Paul Pogba as he was unable to take part in full training today while Scott McTominay could be given a night off having featured in every game so far this season. Solskjaer hinted at his press conference that Fred would be given a chance so the Brazilian could start in the Man Utd midfield.

Nemanja Matic started against Leicester at the weekend but he might retain his place as Solskjaer will want some experience in the team as youngster Angel Gomes is expected to be given a chance to impress. Teenager James Garner could also feature but I think a place on the bench is probably likely.

Attack: Manchester United will make changes in attack with Marcus Rashford set to be given a well-earned rest while Daniel James has been ruled out after missing training today with a minor knock.

Anthony Martial is still unavailable due to a thigh injury that’s hampered him in recent weeks but Jesse Lingard is back in contention after recovering from illness and he should get an immediate recall to the starting eleven.

Solskjaer has confirmed Mason Greenwood will start against Astana and the highly-rated teenager will be desperate to make an impression. With Rashford rested and Martial out, Greenwood could start up front tomorrow.

It will be interesting to see who else starts in attack. Youngster Tahith Chong is an option and should be in the squad while Juan Mata could feature but I think Andreas Pereira may keep his place. 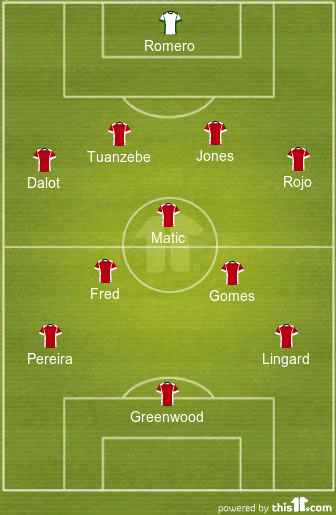