With so many options available to Unai Emery, let’s look at three potential starting line-ups for Arsenal’s Europa League clash with Frankfurt

Arsenal begin their Europa League campaign this evening with a trip to Eintracht Frankfurt. Most see this fixture as the toughest one the Gunners will face in Group F, which also consists of Standard Liege and Vitoria SC.

Frankfurt are currently ninth in the Bundesliga with a mixed start of two wins and two losses. However, possessing players such as striker Bas Dost and winger Filip Kostic means they’ll be sure to cause Arsenal problems. More so, after reaching the semi-finals last year, they’ll be hoping to start the competition strongly.

Arsenal on the other hand are coming off of a disappointing 2-2 draw with Watford and Emery will be looking for his team to bounce back.  Yet, with Aston Villa on Sunday, the Spaniard will be keen to rest some first team starters.

With so many options available, let’s look at three potential starting lineups 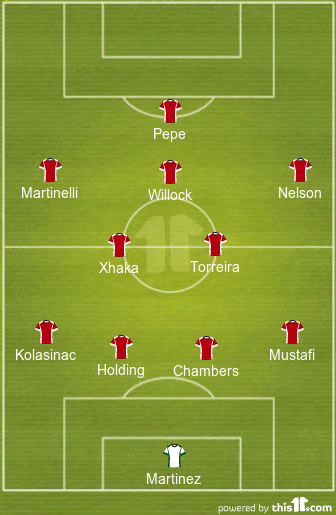 One position almost certain tonight is that of Emi Martinez. The 27-year-old has made only 6 appearances since joining in 2012, but after an impressive loan spell at Reading last year, has earned himself the number two spot reserved for these types of games.

In front of him will see two more returning players. One Arsenal fans will be very excited about and the other, not too much. Firstly, Rob Holding at centre back will be a welcomed sight and he’ll most likely partner good friend Calum Chambers. However, on the right side of the defence could be Shkodran Mustafi. After being told he’s free to leave the club, the German is unlikely to feature in the league, in spite of this, with Arsenal’s defence struggling so far, a strong performance tonight could see him back in contention.

In midfield, we’ll most likely see Lucas Torreira who’s being eased in to the Premier League again this season and Granit Xhaka could be next to him, purely because Xhaka seems to be the first team on Emery’s team sheet. Just in front, Joe Willock deserves his spot with his youthful energy.

Up front, Emery and co will be desperate to see Pepe get on the score sheet to generate a boost of confidence and Reiss Nelson will very likely be trusted on the wing to cause the Frankfurt defence problems. Lastly, Gabriel Martinelli will be keen to show what he can do in his first competitive match for the club. While Emery seems to prefer a back four, the Spaniard could opt for a five in order to give more protection to returning Holding and Mustafi. On top of this, as question are raised over Arsenal’s defensive improvements, a back five will give extra security. Although, this formation would mean no rest for either Kolasinac or Maitland-Niles.

In midfield, Ceballos could be given the chance to show off his skills. After a great start against Burnley, the midfielder has felt the full thrust of the Premier League and supposedly the English weather with Emery explaining his substitution against Watford on the hot climate. A reminder that Ceballos is from Utrera in Spain where the temperature today is 24°c.

With Ceballos further forward, Willock or Guendouzi will most likely partner Torreira who will be keen to prove to Emery what he can do as a DM.

In attack, Aubameyang could start to ensure Arsenal get on the score sheet, however, it could come with massive risks as if the Gabon international picks up any injury, it would be extremely detrimental for Arsenal’s Premier League campaign. In spite of this, there’s no doubt his addition makes Arsenal a much stronger side. Alongside him could be Pepe or even a debut for Gabriel Martinelli. 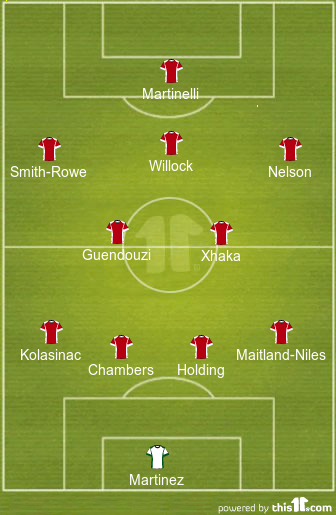 The final option could see Emery putting his full faith in the youth. While the defensive options are somewhat limited, further up the pitch, there’s a plethora of young players who will be desperate to get on the pitch.

Twenty year old Guendouzi may have established himself as a first team starter, but after a questionable display against Watford, Emery may give the young Frenchman a chance to redeem himself. If that’s the case, he’ll most likely partner Xhaka.

In the number 10, we could see Ceballos, Willock or even Reiss Nelson, which would leave three attacking positions filled by Martinelli, Emile Smith Rowe, potentially Bukayo Saka.

The chances of all the young players starting in the same team is unlikely and in truth would be reckless from Emery. However, don’t be surprised if most of them get some minutes this evening.

Emery will most likely go for a blend of youth and maturity, yet one things for sure, if any of these young boys have a good game tonight, it’ll only do wonders for their confidence and future Arsenal careers.