This is a match preview ahead of Arsenal’s Europa League clash with Eintracht Frankfurt including team news, line-ups and predicted score

Arsenal will begin their Europa League group stage campaign with a tricky trip to Eintracht Frankfurt this evening.

Pressure is mounting on Unai Emery after another disappointing result that saw Arsenal blow a two-goal lead to draw 2-2 with Watford last weekend with individual errors costing us yet again.

Some of the players have been publicly vocal about their frustrations and there are whispers Emery is struggling to get his ideas across so it’s going to be fascinating to see how the squad responds tonight.

Arsenal had to settle for Europa League football once again after finishing fifth in the Premier League last season so we’ll be looking to go one better in the competition having lost to Chelsea in the final back in May.

We should be confident of progressing to the knockout stages after being drawn in a favourable group along with Frankfurt, Standard Liege and Vitoria S.C but tonight’s game will be a tough test against a side that got to the semi-finals last campaign.

Arsenal will continue to be without Alexandre Lacazette as he’s ruled out with an ankle injury while Mesut Ozil and Sokratis haven’t travelled to Germany after being ‘rested’ by Emery.

Hector Bellerin and Kieran Tierney are in full training but aren’t considered match fit just yet following serious injuries so they remain unavailable for selection along with Konstantinos Mavropanos.

However, Rob Holding is back in contention and has travelled with the squad after recovering from a knee injury so he’s expected to make his first appearance for the first team since December 2018.

Emery is set to make some changes to his side with Emi Martinez, Shkodran Mustafi, Calum Chambers, Lucas Torreira, Joe Willock and Reiss Nelson pushing for recalls.

Frankfurt will be without Mijat Gacinovic due to injury while Jonathan de Guzman misses out due to a muscular problem. Marco Russ is also ruled out with a ruptured Achilles while Sebastian Rode and Goncalo Paciencia will face late fitness tests. 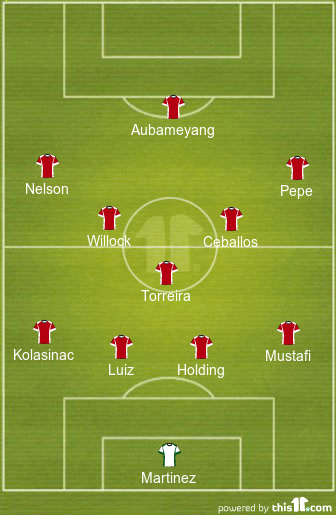 Eintracht Frankfurt 2-2 Arsenal: This will arguably be Arsenal’s toughest game of the group stages and we shouldn’t underestimate a side that took Chelsea all the way to penalties in the semi-finals last season. Frankfurt lost Luka Jovic, Sebastien Haller and Ante Rebic in the summer but they are still a dangerous side who will cause our hapless defence problems so I don’t see us keeping a clean sheet.

However, I expect Emery to field a strong side that will probably include Pierre-Emerick Aubameyang so Arsenal should have plenty of firepower of our own. This should be a good game with lots of goals but I think we’ll have to settle for a point.