Arsenal take on Nottingham Forest in the third round of the Carabao Cup on Tuesday night. Here is the side we think Emery will select for the game:

Arsenal take on Nottingham Forest in the third round of the Carabao Cup at the Emirates on Tuesday night. Here is the side Gooner Mac thinks Unai Emery will select for the game:

Goalkeeper: Emi Martinez is expected to come back in to make another start after impressing in the Europa League last week. Bernd Leno will be given the night off.

Defence: Emery is set to make wholesale changes and use the League Cup as an opportunity to give our fringe players and youngsters a taste of first team action. Ainsley Maitland-Niles is suspended following his sending off against Aston Villa while David Luiz, Sokratis and Sead Kolasinac should all be rested.

Hector Bellerin and Kieran Tierney have played for the U23s recently but they aren’t likely to be risked for the first team just yet while Dinos Mavropanos could be named on the bench after playing 90 minutes for the development side on Friday night.

Calum Chambers is expected to start at right-back after filling-in for Maitland-Niles on Sunday while Shkodran Mustafi will no doubt get another run out after playing against Eintracht Frankfurt last week.

Rob Holding is available again after recovering from a knee injury and he’s set to make his first team comeback tomorrow night having played for the Arsenal U23s in recent weeks. It will be great to have him back so hopefully he comes through the game unscathed.

It will be interesting to see who Emery goes with at left-back but 20-year-old Tolaji Bola could be handed his first team debut having impressed with the U23s this season.

Midfield: I expect Granit Xhaka to be given a rest while Matteo Guendouzi could certainly do a with a breather following his superb second half performance against Aston Villa at the weekend.

Lucas Torreira is likely to be recalled in midfield while Joe Willock is expected to be given another run out after breaking into the first team set-up this season with some superb displays.

Dani Ceballos started against Villa at the weekend so he’s likely to make way on Tuesday and that may mean a recall for Mesut Ozil in the attacking midfield position as he didn’t feature against the Villains having been an unused substitute.

Attack: Arsenal will continue to be without the services of Alexandre Lacazette due to an ankle injury so surely Pierre-Emerick Aubameyang will be given a well-earned rest having started in every game so far this campaign? The Gabon hitman has scored seven goals in seven games so he’s invaluable to Arsenal, especially with Lacazette out, so it would be madness to risk him against Forest.

However, with Eddie Nketiah on loan at Leeds we don’t have too many options up front. Tyreece John-Jules and Folarin Balogun could be in the squad after impressing with the U23s but Emery may opt for Gabriel Martinelli as he’s closer to the first team set-up.

Reiss Nelson is likely to get a start after not featuring against Villa so Nicolas Pepe will be given a rest while I expect Bukayo Saka to make way having started in our last two matches. The teenager has been hugely impressive and may be on the bench tomorrow but I think Emile Smith Rowe will come in to the starting eleven. 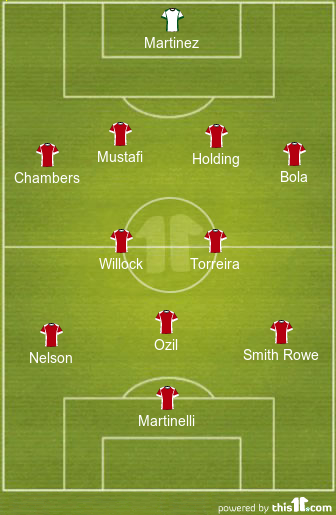