Chelsea take on Grimsby in the third round of the Carabao Cup on Wednesday night. Here is the team we expect Frank Lampard to select for the game:

Chelsea will be looking to avoid an upset when they take on Grimsby Town in the third round of the Carabao Cup on Wednesday night. Here is the team we expect Frank Lampard to select for the game:

Goalkeeper: Kepa Arrizabalaga will be given the night off so number two goalkeeper Willy Caballero should come in to make a rare start between the sticks.

Defence: Lampard is expected to make a number of changes in defence with Cesar Azpilicueta among those rested. Andreas Christensen won’t be risked after picking up a knee injury during the defeat to Liverpool at the weekend while youngster Fikayo Tomori should be given a breather having broken into the first team set-up this season.

Emerson has been ruled out after suffering a thigh injury at the weekend so Marcos Alonso should be recalled at left-back but Antonio Rudiger remains out with a groin injury so Kurt Zouma should come back into the back four.

Reece James is back in contention after recovering from injury so he’s expected to start at right-back while youngster Marc Guehi could be given a chance to impress in the middle of the Chelsea defence.

Midfield: N’Golo Kante is highly unlikely to be risked after only just returning from an ankle injury so the Frenchman should be given the night off. Mateo Kovacic is also expected to be rested so highly-rated youngster Billy Gilmour is set to be given the chance to impress.

Ruben Loftus-Cheek is still working his way back from a serious Achilles injury while Marco van Ginkel is also on the sidelines so Lampard may be forced to use one of his first team regulars.

Jorginho is the man most likely to start so Chelsea fans will be hoping he doesn’t pick up any knock against the League Two outfit while Ross Barkley should come in to the attacking midfield role after not featuring against Liverpool.

Attack: Chelsea are expected to freshen things up in attack with Tammy Abraham and Willian rested while Mason Mount is also set for a breather after being rushed back for the Premier League clash with Liverpool at the weekend following an ankle knock.

Olivier Giroud has fallen out of favour under Lampard and it appears Michy Batshuayi is now ahead of him in the pecking order so the Belgian international could be the man to replace Abraham up front.

Pedro is an option for Chelsea but Lampard has already suggested that Callum Hudson-Odoi will get a run out as he looks to make his return from a serious Achilles injury while Christian Pulisic is also set for a recall having been named on the bench at the weekend. 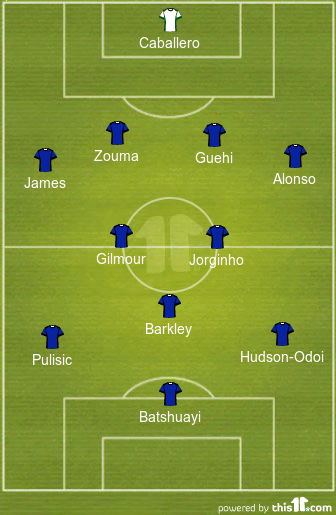