This is our match preview ahead of Arsenal’s Europa League clash with Standard Liege including team news and line-up’s.

Arsenal can take control of Europa League Group F with victory over Standard Liege at the Emirates Stadium tonight.

The Gunners kicked-off their European adventure with an impressive 3-0 win over last seasons semi-finalists Eintracht Frankfurt in Germany two weeks ago so they’ll be in great shape if they can beat Liege in North London this evening.

Unai Emery’s men drew 1-1 with Manchester United at Old Trafford on Monday night to move back into the top four but the battle for Champions League qualification is going to be tight so the Arsenal boss will also take the Europa League seriously this season.

Liege head to London off the back of a disappointing 1-1 draw at home with Charleroi at the weekend but they beat Vitoria SC in their Europa League opener so they’ll be hoping to cause an upset tonight.

Arsenal continue to be without the services of Alexandre Lacazette due to an ankle injury while Emile Smith Rowe is also unavailable but otherwise the squad is in excellent health.

Kieran Tierney is set to start at left-back after Emery played down reports he’d suffered a setback in his recovery from a groin injury while Rob Holding should also get another run out.

Hector Bellerin could make his first senior start of the season as he continues to build-up his match fitness following a serious knee injury but Ainsley Maitland-Niles is another option if Emery doesn’t want to risk the Spaniard from the start.

The Arsenal boss will rotate his squad ahead of Sunday’s Premier League clash with Bournemouth with Mesut Ozil, Riess Nelson, Joe Willock, Shkodran Mustafi, Emi Martinez and Gabriel Martinelli all set to feature.

As for Liege, they’ll be without striker Orlando Sa but otherwise they have a fully fit squad to choose from. 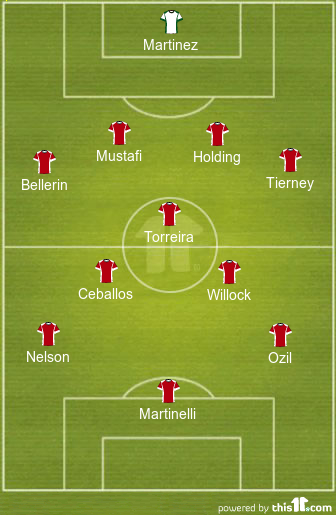 Arsenal 3-0 Standard Liege: Arsenal have won all four previous meetings with Standard Liege and they’ll be confident of extending that run tonight. The Gunners have a strong recent home record in Europe having won their last five games at the Emirates and I’m excited to see how some of the young guns perform this evening.

They were hugely impressive in Germany two weeks ago and another display like that should see Arsenal ease to victory. I’m going for a repeat score-line with Arsenal securing a routine 3-0 win tonight.