Arsenal will be eyeing a win over Bournemouth on Sunday afternoon. Here is the side Gooner Mac thinks Unai Emery will select for the game:

Arsenal will be hoping to cement their position in the top four with a win over Bournemouth on Sunday afternoon. Here is the side Gooner Mac thinks Unai Emery will select for the game:

Goalkeeper: Emi Martinez put in another solid display during Arsenal’s Europa League win over Standard Liege but Bernd Leno is still expected to be recalled against Bournemouth.

Defence: Hector Bellerin, Rob Holding and Kieran Tierney all came through ninety minutes against Liege after recovering from their injuries but Emery is still expected to make changes in defence this weekend. The trio have only recently made their returns to action and the Arsenal boss isn’t likely to risk them in a second game within just four days.

Therefore, Sead Kolasinac should come in at left-back while David Luiz and Sokratis are likely to be recalled in the middle of the back four. Shkodran Mustafi produced a decent performance on Thursday night but he’s still expected to be dropped against Bournemouth.

Ainsley Maitland-Niles played further forward in the Europa League so he could drop back into defence but Calum Chambers is also an option at right-back after starting against Manchester United on Monday.

Midfield: Arsenal’s midfield looked well balanced against Standard Liege but it’s important to remember the level of opposition they were up against. Lucas Torreira looked for more comfortable playing as a defensive midfielder rather than further forward but Granit Xhaka is still expected to be recalled on Sunday.

Joe Willock put in another excellent performance in the Europa League but Matteo Guendouzi is likely to come in against Bournemouth. Dani Ceballos was also superb against Liege and with Mesut Ozil clearly out of favour, Emery may retain the Spaniard to offer some creativity in the middle of the park.

Attack: Arsenal are still without Alexandre Lacazette but they are certain to recall Pierre-Emerick Aubameyang after he was rested in Europe so that means Gabriel Martinelli will make way despite scoring twice against Liege last night.

Riess Nelson did his first team chances no harm with a solid run out on the left side of the Arsenal attack but Bukayo Saka is expected to be recalled after being rested for the Europa League clash.

Nicolas Pepe looks low on confidence right now as he continues to adapt to life in England but the Ivorian should get another chance to impress against Bournemouth this weekend. 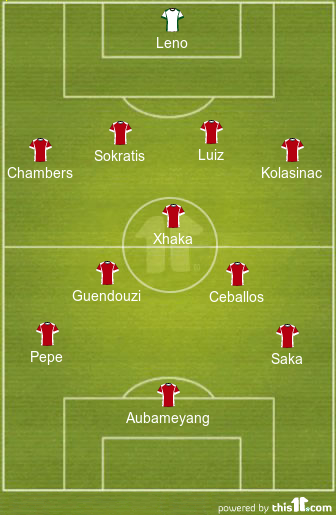