This is a match preview ahead of Arsenal’s Europa League clash with Vitoria at the Emirates including team news, line-ups and predicted score

Arsenal can take another step towards qualification to the knockout stages of the Europa League with a win over Vitoria at the Emirates tonight.

The spotlight is firmly on boss Unai Emery following Monday night’s shock 1-0 defeat to Sheffield United at Bramall Lane which has left the Gunners sitting outside the top four in the Premier League table.

Emery will be hoping the Europa League can be his salvation as Arsenal have been faultless so far having secured a comfortable 3-0 victory at Eintracht Frankfurt on Matchday 1 before thrashing Standard Liege 4-0 earlier this month.

The victories mean Arsenal currently sit three points clear of Frankfurt and Liege at the top of Group F so another win over bottom side Vitoria this evening would put the north Londoners on the cusp of the knockout stages.

Arsenal have no fresh injury worries to contend with so Emery has virtually a fully-fit squad to choose from with Reiss Nelson the only absentee as the attacker continues to recover from a knee injury.

The boss is expected to rotate his squad once again in Europe with the likes of Sokratis, David Luiz, Granit Xhaka, Matteo Guendouzi, Nicolas Pepe and Pierre-Emerick Aubameyang rested.

Alexandre Lacazette made his comeback from an ankle injury with a substitute appearance against Sheffield United on Monday night and the Frenchman is expected to start this evening.

Emile Smith Rowe could also be back in the squad after recovering from concussion while Emi Martinez, Shkodran Mustafi, Lucas Torreira, Dani Ceballos, Gabriel Martinelli and Ainsley Maitland-Niles are also pushing for recalls.

Kieran Tierney, Hector Bellerin and Rob Holding didn’t feature on Monday so they should start in defence tonight while Mesut Ozil is expected to finally get a recall after being frozen out by Emery this season.

As for Vitoria, they have some injury problems to contend with as Lucas Evangelista, Miguel Silva and Valeriy Bondarenko are all expected to miss out while Mubarak Wakaso and Andre Andre are definitely missing for the Portuguese outfit. 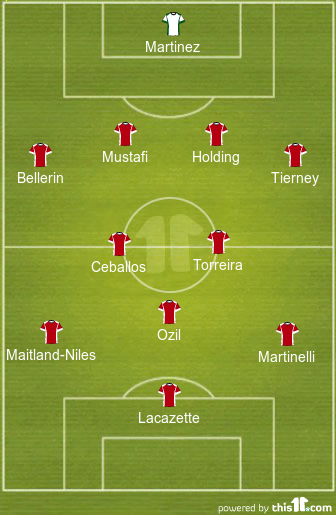 Arsenal 4-0 Vitoria: Arsenal’s form in the league has been disappointing but you cant fault them in Europe as the second-string have been very impressive this season. Vitoria have already lost their first two games to Frankfurt and Liege and they haven’t won any of their previous seven away matches in the Europa League. Arsenal on the other hand have won their last six European games at the Emirates so this has home win written all over it.

The Gunners seem to be playing with more freedom in the Europa League and I think we’ll see another comfortable victory in north London this evening. I’m going 4-0 to Arsenal with Lacazette to bag himself a brace.