Arsenal take on Liverpool at Anfield in the fourth round of the Carabao Cup on Wednesday night. Here is the side Gooner Mac thinks Unai Emery will select

Arsenal will look to put Sunday’s disappointment behind them when they take on Liverpool at Anfield in the fourth round of the Carabao Cup on Wednesday night. Here is the side Gooner Mac thinks Unai Emery will select for the game:

Goalkeeper: The boss is expected to rotate his side so we should see a team similar to the one that has been picked in the Europa League. That means another chance for Emi Martinez in goal with Bernd Leno making way.

Defence: Calum Chambers and David Luiz won’t travel for the game while Sokratis and Kieran Tierney are likely to be rested. Hector Bellerin is set for another start at right-back as he looks to build up his match fitness while Sead Kolasinac should come in at left-back.

Rob Holding is almost certain to be given another run out against Liverpool while Shkodran Mustafi could also come in as they’ve formed a decent partnership in the Europa League this season.

Midfield: Emery confirmed at his press conference this afternoon that Granit Xhaka won’t be in the squad against Liverpool following his ugly public bust-up with the Emirates crowd on Sunday afternoon.

The Swiss international reacted badly to jeers from the supporters when he was being substituted as he mouthed ‘f*** off’ to his own fans, threw the armband and his shirt to the ground and stormed down the tunnel. It’s a tough situation for Emery to deal with but Xhaka won’t be involved tomorrow.

Lucas Torreira should be recalled in the holding role after being named on the bench at the weekend while Joe Willock could be in-line for a start after not being included in the matchday squad against Crystal Palace. Matteo Guendouzi will most likely make way along with Dani Ceballos.

Attack: Emery confirmed this afternoon that Mesut Ozil will be back in the squad against Liverpool so the German playmaker could make his first appearance in an Arsenal shirt since the Carabao Cup third round clash with Nottingham Forest in September.

Pierre-Emerick Aubameyang won’t travel to Merseyside as he’s been given another rest while Alexandre Lacazette is unlikely to be risked from the start as he’s just back from a lengthy injury absence.

Therefore, Gabriel Martinelli should start up front and the Brazilian youngster will be keen to take his form from the Europa League into the domestic cup as he’s been superb when given a chance this season.

Bukayo Saka is expected to come back into the Arsenal attack with Nicolas Pepe making way. Ainsley Maitland-Niles is another option for Emery as he’s been playing further forward of late but I think Emile Smith Rowe will get the nod at Anfield. 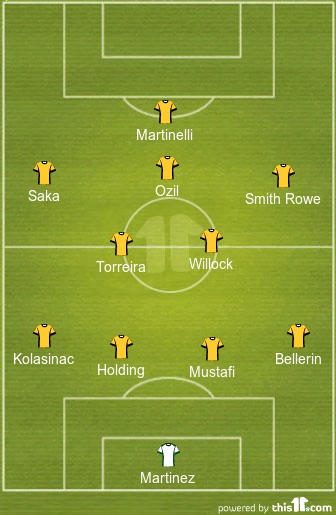