Chelsea take on Watford at Vicarage Road on Saturday evening. Here is the team we expect Frank Lampard to select for the game:

Chelsea will look to bounce back from their Carabao Cup defeat when they take on Watford at Vicarage Road on Saturday evening. Here is the team we expect Frank Lampard to select for the game:

Goalkeeper: Kepa Arrizabalaga is set for a recall after being given the night off during Chelsea’s 2-1 defeat to Man Utd on Wednesday night. Willy Caballero will therefore drop back to the bench.

Defence: Chelsea are expected to make a couple of changes in defence with Cesar Azpilicueta coming in for Reece James at right-back while Fikayo Tomori is set to come back in after being rested in the League Cup.

Youngster Marc Guehi is the man likely to make way as Kurt Zouma should keep his place at the heart of the back four while Marcos Alonso should retain his spot at left-back with Emerson Palmieri still working his way back to full fitness.

Antonio Rudiger has been back in training recently after recovering from a groin injury but he’s still lacking match fitness so this game is likely to come too soon while Andreas Christensen remains on the sidelines with a thigh injury.

Midfield: Chelsea will have to check on the fitness of N’Golo Kante as he continue to recover from a groin injury that’s kept him out since the international break. Kante wasn’t fit enough for a place in the squad against United so it’s unlikely he’ll be ready to start against Watford.

Jorginho is certain to keep his place in the deep lying playmaker role while Mateo Kovacic is on a great run of form so he should start alongside the Italian international once again this weekend.

Mason Mount is in-line for a recall after being named among the substitutes on Wednesday night so Billy Gilmour will make way but Chelsea will once again be without Ruben Loftus-Cheek as he’s still working his way back from a serious Achilles injury.

Attack: Michy Batshuayi got himself on the score-sheet in the Carabao Cup defeat to United but he’s expected to drop back to the bench with Tammy Abraham recalled after being named among the subs last night. Olivier Giroud may have to settle for a place on the bench once again.

Willian is pushing for a recall in attack so Callum Hudson-Odoi could drop out after a disappointing performance in the League Cup. Pedro will also be hoping to feature after not starting in a month but Christian Pulisic should keep his place after scoring a superb hat-trick against Burnley last weekend. 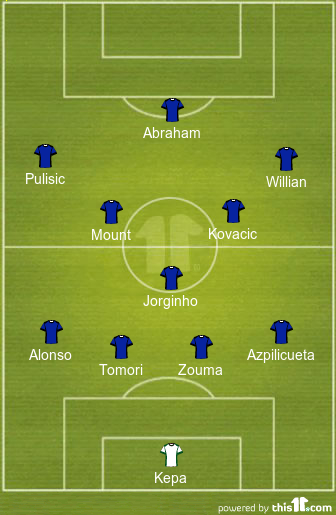