Arsenal take on Southampton at the Emirates on Saturday afternoon. Here is the side Gooner Mac thinks Unai Emery will select for the game:

Arsenal will look to get back to winning ways with a win over Southampton at the Emirates on Saturday afternoon. Here is the side Gooner Mac thinks Unai Emery will select for the game:

Goalkeeper: I don’t see the boss making any changes in goal so Bernd Leno should continue between the sticks with Emi Martinez on the bench.

Defence: Emery has gone with a back three in Arsenal’s last two games against Vitoria and Leicester and he appears to be favouring that system right now so we could see it deployed once again this weekend.

Rob Holding faces a late fitness test after missing training on Thursday due to a minor knock but if he’s fit then he should continue on the left side of the three with David Luiz in the centre.

Sokratis is pushing for a recall after being named on the bench last time out so Calum Chambers could make way if the Greek international is recalled against Southampton.

Midfield: Sead Kolasinac is a doubt after picking up a knock while away with Bosnia during the international break so Kieran Tierney is set to start on the left side. The former Celtic star pulled out of the Scotland squad to focus on building up his fitness with Arsenal following a niggling groin injury so hopefully he’s well rested.

Hector Bellerin should continue on the right side after returning to full fitness in recent weeks while Matteo Guendouzi is expected to keep his place in the middle of the Arsenal midfield this weekend.

Granit Xhaka hasn’t featured since being stripped of the captaincy following his bust up with the fans but Emery has hinted he could return to the squad on Saturday. However, I don’t think we’ll see Xhaka start so Lucas Torreira should keep his place in the middle of the park.

Unfortunately Arsenal confirmed a big blow today with the news that Dani Ceballos has been ruled out until mid-December with a hamstring injury but Joe Willock will be an option from the bench against Southampton.

Attack: The good thing about Emery’s switch of formation is it gives the Arsenal boss the chance to play Mesut Ozil in his best position behind two strikers and we shouldn’t have any excuse not to create plenty of chances this weekend.

Pierre-Emerick Aubameyang and Alexandre Lacazette should lead the line up front and with Ozil supplying the passes in the No.10 role and Bellerin and Tierney on the wings, our strike duo should get plenty of service at home to Southampton.

Nicolas Pepe didn’t train on Thursday after arriving back late from duty with the Ivory Coast so I don’t see him starting this weekend. Bukayo Saka is a doubt due to a knock but Gabriel Martinelli and Reiss Nelson will be options from the bench. 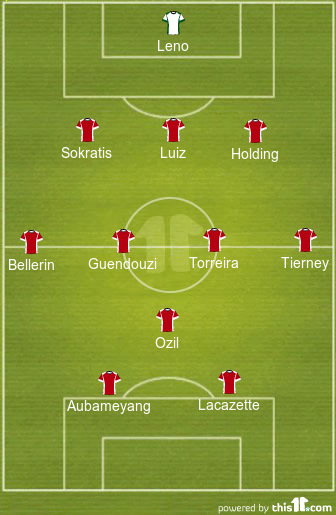