Arsenal travel to Norwich City on Sunday afternoon. Here is the side Gooner Mac thinks Freddie Ljungberg will select for the game:

Freddie Ljungberg will take charge of his first game as interim Arsenal manager when the Gunners travel to Norwich City on Sunday afternoon. Here is the side Gooner Mac thinks Ljungberg will select for the game:

Goalkeeper: Freddie is unlikely to make any changes to the goalkeeping order so Bernd Leno should start with Emi Martinez on the bench.

Defence: Based on how he lined-up his team when in charge of the Arsenal U23s, Ljungberg is expected to go with either a 4-2-3-1 or a 4-3-3 formation so it looks like we’ll move away from the back three that Emery has gone with recently.

Hector Bellerin will face a late fitness test after missing the Eintracht Frankfurt defeat with a minor hamstring issue but he should start at right-back if fit while Kieran Tierney is likely to keep his place on the left despite Sead Kolasinac’s return to fitness.

David Luiz picked up a rib injury on Thursday night so he’s a doubt for the trip to Norwich. Rob Holding could be recalled after overcoming a minor knock to start alongside Sokratis with Shkodran Mustafi making way.

Midfield: Granit Xhaka made his return to the Arsenal side against Frankfurt and he received a warm welcome from the supporters but I wouldn’t be surprised to see him dropping out on Sunday afternoon.

Matteo Guendouzi is likely to be recalled in midfield while Lucas Torreira could get the nod to offer some protection to the back four. Hopefully Freddie uses Torreira as a proper defensive midfielder rather than further forward as we’ve seen from Emery at times this season.

Ljungberg is a huge fan of Joe Willock following their time together with the Arsenal U23s so the youngster may see plenty of game-time over the coming games but Dani Ceballos remains out with a hamstring injury.

Attack: Hopefully we see the return of attacking football under Ljungberg as the performances under Emery were woeful. I expect Pierre-Emerick Aubameyang and Alexandre Lacazette to both start on Sunday with Auba possibly playing from the left wing.

It will be interesting to see how Freddie uses Mesut Ozil but I have a feeling he’ll be an important part of his plans so the German playmaker should start in the No.10 role against Norwich on Sunday.

Nicolas Pepe has been left out of Arsenal’s last two games by Emery but I hope we see him brought back into the side on Sunday. Gabriel Martinelli, Bukayo Saka and Reiss Nelson are also options for the new boss but they may have to settle for places on the bench. 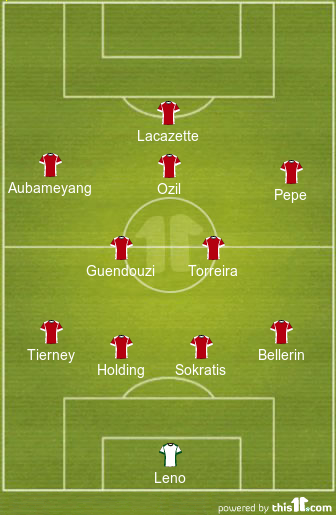