Chelsea take on Lille at Stamford Bridge in their Champions League showdown on Tuesday night. Here is the team we expect Frank Lampard to select

Chelsea take on Lille at Stamford Bridge in their Champions League showdown on Tuesday night. Here is the team we expect Frank Lampard to select for the game:

Defence: Chelsea have been handed a huge boost as Antonio Rudiger has been passed fit to start after recovering from a knee injury that’s hampered him this season. The German centre-back could come in to partner Kurt Zouma with Andreas Christensen making way. Fikayo Tomori has been ruled out with a minor hip injury.

Emerson Palmeiri is pushing for a recall at left-back after being named on the bench for the last two games so we could see Cesar Azpilicueta make way with Reece James keeping his place at right-back following a couple of impressive performances.

Midfield: Chelsea are expected to recall Jorginho after he was named on the bench during the defeat to Everton at the weekend so Lampard could make a slight tactical switch with the Italian starting at the base of the midfield.

N’Golo Kante should keep his place in the Chelsea starting eleven while Mateo Kovacic is expected to be retained after continuing his fine form with a goal at the weekend.

Mason Mount could be the man to make way if Jorginho is recalled so the English youngster may have to settle for a place on the bench along with Ross Barkley – who’s available after returning to full fitness. However, Ruben Loftus-Cheek remains on the sidelines with an Achilles injury.

Attack: Tammy Abraham will once again lead the line up front with Michy Batshuayi named among the substitutes but Olivier Giroud is set to miss out with a knock after missing training today.

Callum Hudson-Odoi is pushing for a recall while Pedro will also hope to be involved after not making the squad at the weekend but I don’t think Lampard will make any changes to his front three.

Willian is expected to keep his place on the right while Christian Pulisic should start once again on the left side of attack so the likes of Pedro and Hudson-Odoi will have to settle for places on the bench. 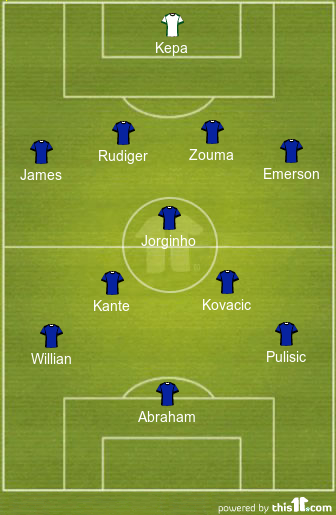