Manchester United will be looking to get back to winning ways when they take on West Ham in the 5th round of the FA Cup at Old Trafford this evening.

The Red Devils saw there Premier League title hopes dented by a frustrating 3-3 draw with Everton at the weekend. United held a two-goal lead before Dominic Calvert-Lewin scored a 95th minute equaliser to salvage a point for the Toffees at Old Trafford.

That result has left United sitting five points adrift of leaders Manchester City in the table having played a game more so Ole Gunnar Solskjaer’s side blew a terrific chance to keep in touch with their rivals.

West Ham arrive in Manchester off the back of a poor 0-0 draw at Fulham but they’ve enjoyed an excellent season so far as David Moyes’ men sit level on points with fifth-placed Chelsea and just one point off the top four.

The Hammers are a dangerous side on their day and have plenty of quality players throughout their team so Manchester United won’t be taking anything for granted as they battle for a place in the quarter-finals of the FA Cup this evening.

Our player to watch for tonight’s game is Donny van de Beek and we’ll be using Football Index stats to show you how you could profit from a positive performance from the Dutchman tonight. If you want to find out more about Football Index then check out Football Index Analysis as it’s an excellent resource packed with useful information for beginners as well as more seasoned traders. There are plenty of other products in this industry and you can check out a Sorare review here if that’s something that interests you.

So, van de Beek is expected to get his chance tonight and he’ll be desperate to impress Solskjaer following a frustrating start to life at Old Trafford. The 23-year-old was one of the hottest young talents on FI last year and was worth over £3.40 a share in August 2020 when he sealed his transfer to United from Ajax.

His struggles in Manchester have led to his price dropping to around £0.80p per share but this could be a good time to invest in the youngster. Paul Pogba is facing several weeks on the sidelines with a thigh injury and van de Beek is expected to be the main beneficiary during his absence. 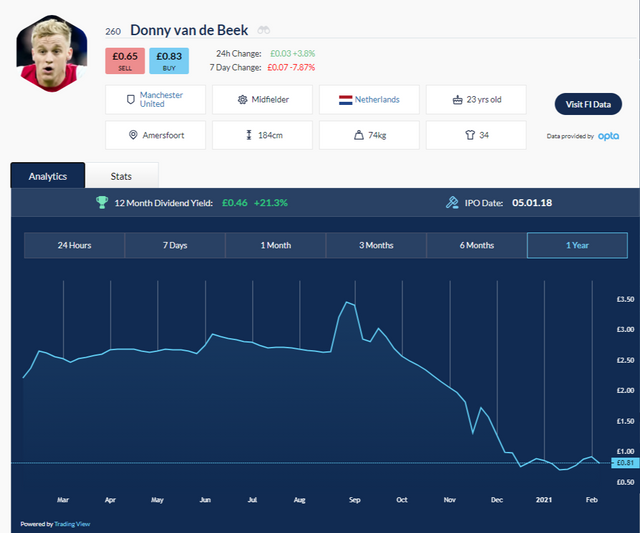 The midfielder is set to start tonight and if he impresses against West Ham, we should his price rise on FI with sentiment shifting as traders anticipate van de Beek will be given more action over the coming weeks. This could provide traders with the opportunity to either flip for a quick profit or hold longer-term if they think van de Beek has the potential to compete for dividends.

Personally, I see this is an opportunity for a quick flip for profit as van de Beek doesn’t have a strong track record for PB. He’s averaged just 34 points per game at United from his 18 appearances. Many will rightly point to the fact he rarely plays 90 minutes, however, even at Ajax when he did complete games regularly he still only averaged around 83 points in their Europa League games last season with a top score of 147.

Van de Beek may nick a couple of media days if he finds some form but he’s very unlikely to win PB, especially competing against Bruno Fernandes, so a quick flip is the best play here. You can currently buy at around £0.80p, he’s already up 3p in the last 24 hours and I wouldn’t be surprised to see van de Beek push £1 if he performers well tonight.

Man Utd 2-1 West Ham: Solskjaer is expected to make some changes tonight but United have plenty of depth in their squad and should prove too strong for West Ham. It’s expected to be a hard-fought game and the Hammers will cause problems, but I’m backing Man Utd to edge it to book their place in the quarter-finals.