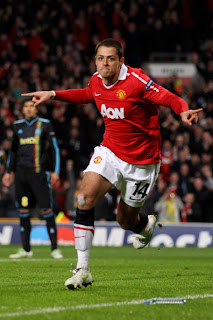 Beckham played close to four hundred games for United, and scored 87 very important goals making himself the biggest name in football since his debut in 1992 in the League Cup against Brighton Hove Albion. Hernandez’s competitive debut was a different situation altogether. He came on against Chelsea in the Community Shield, scoring his first goal for United in a 3 – 1 win.

This has been one of many goals this season for Chicharito and Beckham has been impressed with the 22 year-old:

“Chicharito has been exceptional when he’s played. He scores goals, he takes chances, he works hard for the team.

Hernandez has taken the place of Berbatov in the last few games, and has not disappointed, scoring two against Marseille to pull United through to the Champions League quarter finals. Beckham emphasized the quality of Hernandez, as Sir Alex wouldn’t have him in the team if he wasn’t good enough.

“He wouldn’t be in the team and he wouldn’t be scoring goals if Sir Alex Ferguson didn’t think he was a good player.

The current LA Galaxy star finished by wishing Chicharito good luck in his career at United.

“Enjoy playing for Manchester United. It’s the best club in the world.”

Beckham’s television career included his various Pepsi adverts and it seems the Mexican is following in Beckham’s commercial footsteps with the new Coke Zero advert, which can be viewed here.