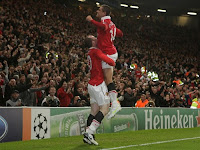 Manchester United edged through their all-English UEFA Champions League Quarterfinal match with a deserved 2-1 victory over Chelsea to win the tie 3-1 on aggregate. Leading 1-0 from the first leg at Stamford Bridge, goals from Javier Hernandez and Ji-Sung Park in both halves negated Didier Drogba’s goal for the Blues to propel the Reds to the Semifinals of the competition.

Chicharito and Park contributed the crucial goals for the Reds, but there were dominate performances all over the pitch, but which Red earned Man of the Match honors for United?

Put in a last-ditched, terrifically timed challenge on Nicolas Anelka in the first half, which was just the icing on the cake on a superb all-around performance for van der Sar.

Booked for an early challenge on Flourent Malouda, but, other than that, O’Shea was solid through out the match slotting in at right-back, which was primarily down to Chelsea attacking through the center.

Picked up an early knock in the beginning of the game, but, to his credit, Ferdinand showed unbelievable courage to play through the pain barrier and limber through the 90 minutes.

Another sound performance by the United skipper, but Vidic was faced with some uncomfortable moments when Drogba came on after halftime.

A much better performance compared to the first leg, but Evra nearly put the Reds under some unnecessary pressure again when he was booked for a careless rugby tackle on Drogba.

Not as influential as he was at the weekend against Fulham, Nani’s pace and trickery still caused the Chelsea defenders problems, but Sir Alex withdrew him after he was subjected to two consecutive hard challenges.

Up against three Chelsea center midfielders, Carrick played with complete class and composure, and was, by far, United’s most consistent player over the two legs against the Blues.

Always a ball full of energy, Park added another vital Champions League goal to his belt, however, the South Korean was just as vital winning the ball back for United.

Rested at the weekend, Giggs turned in a match-turning display with well-timed runs and two perfectly-placed assists.

In the Reds’ last two European outings at Old Trafford, Hernandez has scored three goals, which justifies his inclusion of him in the United starting line-up.

After being given an unwanted domestic two-match break, Rooney was raring to go and the worked his socks off, and it was his precise cross-field ball that set up the vital first goal.

Surprisingly left out of the starting XI, Valencia showed character by taking a swipe at Terry to earn a huge cheer from the home crowd.

Despite having the lead from the first leg, Manchester United was predicted to exit the UEFA Champions League against, however, as they have done all season long, the Reds defied all odds to reach the Semifinals of competition for the fourth time in the last five seasons.