Chicharito Has Eclipsed All Of Ferguson’s Expectations 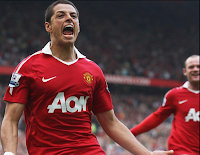 Javier Hernandez leaped to Manchester United’s rescue once again, and Sir Alex Ferguson jumped at the chance to unveil how quickly he has settled in at Old Trafford.
In just his first season with the club, the 22-year old has taken the onus to develop himself into a first-team player, but nobody, including the manger could have guess how good he would be so quickly.

Chicharito has already scored 19 goals since arriving at United from Mexican club, Club Deportivo Guadalajara, last summer, and his enthusiastic personality seems to be inspiring everyone involved with the club.

The youngster’s exuberant personality is just one of his many attirbutes that has helped him take the English game by storm and settle in so fast at United.

Ferguson, and every other manager, take risks signing players from foreign countries and how they will adapt to the pressures and style of play of the Premier League.

Chicharito has come from a very physical league, but, in all honesty, the Primera División de México is not on the same level that is played in Europe or England. Hernandez’s work rate and natural goal scoring ability has enabled him to overcome any of the potential set backs.

Snubbed from winning the PFA Young Player of the Year in favor of Arsenal’s Jack Wilshere, Chicharito has submerged himself in the hearts of the United supporters with timely goals, but also becuase of his unwavering passion to play for the world’s biggest club.

From day one, the very humble Mexican is respectful and cherishes every moment he is able to pull on the famous Red shirt. Today that kind of loyalty is unheard of and Chicharito should be seen as a role model for his playing ability, but also his gentleman mentality off of it.

Although he was getting a lot of stick for his early goal celebrations for kissing the crest on his shirt, but those actions were heartfelt, and done out of sheer respect for being given an opportunity to fulfill a dream of playing for a club like Manchester United.

Many players today do not fully appreciate, or utilize, their God-given talents to play the sport most people would play for free – but Hernandez does just that.

Ferguson has admitted that he will paying much closer attention to the football being played in the Americas because of how quickly Chicharito has settled in. There is no question that this side of the Atlantic has a lot of gifted players, but Hernandez could be a one-off.

As Ferguson has found out many times before, natural finishers are hard to find, but Hernandez possesses that and the ability to make smart runs inside the area – which makes him even more of a rare jewel.

The way that he works space for himself in such close corridors is fascinating to watch, and exactly why Ferguson is starting him over more experienced professionals like Dimitar Berbatov and Michael Owen. Hernandez gives real meaning to “fox-in-the-box,” and creates a lot of his goals by outwitting accomplished defenders.

Against Everton, Chicharito faced two very experienced defenders in Phil Jagielka and Sylvan Distin, but he showed composure and calmness thinking of different ways that he could break them down. He used timing, quickness and surreal athletic ability.

Most youngsters can become easily frustrated when they are being hounded by defenders or denied by a string fine saves made by a goalkeeper, but not him. Tim Howard, another player from this side of the pond, made three very decent saves in hopes of keeping the young Mexican at bay, but Hernandez’s persistency paid off and he got the winner.

That goal, as well as the 11 others he has scored this season, could very well make him a champion in the Barclays Premier League in the first time of asking at Manchester United, and Javier Hernandez has proven that he is worthy of such a lofty title.