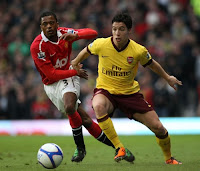 Manchester United travel to the Emirates Stadium to take on Arsenal, and this match could decide who will land the 2010/11 Barclays Premier League title.

The Reds took a ginormous step towards a place in the 2011 UEFA Champions Final with a resounding 2-0 win over Schalke 04, but now Sir Alex Ferguson will turn their focus back to their domestic objective.  The Gunners had their title hopes flattened last weekend when they lost to Bolton 2-1 at the Reebok Stadium, which also ended their 16-game unbeaten run, but Arsene Wenger will remain defiant and think that they still have an outside shot of landing the trophy.

Because of that loss, Arsenal is currently in third place in the league table slipping nine points behind United, and three points behind Chelsea. On top of making up that point disadvantage, the Gunners would also have to overturn their goal difference, which, right now, is at +31 – eight short of United and six off of Chelsea.

Since they lost 2-1 to Birmingham City in the 2011 Carling Cup Final at the end of February, the Gunners have only won twice in their last 10 games – a 5-0 win over Leyton Orient and a 3-1 victory over Blackpool, who look destined for the Championship next season. Not very impressive from Arsenal, despite their manager banging on about that fool’s gold unbeaten streak, which has seen them draw five of their last seven Premier League games.

The Emirates was once a fortress, but this season, the Gunners have dropped 17 points drawing four, losing three. That is certainly one of the main reasons why the Gunners are nine points adrift, because, at Old Trafford, the Reds have only relinquished two points from 17 games to date.

Next in line to United, Arsenal are the best scoring team in the Premier League with 67 goals for, which 31 of them have come at home, and that is only good for sixth in the league. They will certainly be looking to improve on that total, and might be encouraged since the Red Devils have conceded 23 goals in their 17 games for a 1.35 goals against average.

Robin Van Persie is the club’s leading goal scorer with 15 goals in the Premier League – including seven in successive away games, which is a new league record. Samir Nasri, who was recently named to the PFA Team of the Year, is second on the team with 10.

Defensively, Arsenal have only given up 13 goals in their 17 home games, which is good for fifth in the Premier League. It is not the amount of goals that they have conceded, but how and when they have let their opponents score, because it has led to them dropping points at an alarming rate.

Thomas Vermaelen, who is undoubtedly their best defender, has not played since August and his fill-in replacements – Johan Djourou, Laurent Koscielny and Sebastien Squillaci – have all failed to live up to their expectations. That has been coupled with glaring mistakes from their goalkeepers, which has led to Wenger re-signing Jens Lehmann out of retirement.

This is the third meeting between these two long-standing rivals, and the Reds have snapped up two victories and two shutouts in the North-South Derby.

The latest match, an FA Cup Quarterfinal tie at Old Trafford, saw the Reds outfox the Gunners 2-0. Fabio opened the scoring after a wonderfully worked move in the first half, and just minutes after the break, Wayne Rooney nodded home United’s second goal from close range to seal progress for the Reds.

With such a comfortable victory in the Champions League, Ferguson was afforded the chance to sub off Ji-Sung Park, Javier Hernandez and Rooney, so it is almost certain that they will all play some part against Arsenal. That means that, even if he recovers from his slight groin injury, Dimitar Berbatov would still only play a bit part against the Gunners – but that should not be shocking since he has not played a single minute in the two previous matches.

Paul Scholes is serving the final game of a three-match suspension, but Sir Alex could have one of his big-game players back from a long spell on the sidelines as Darren Fletcher played his first game since coming on a late substitute against Liverpool on March 6.

If Manchester United plays like they did against Schalke 04 then they will be very hard defeat, but Arsenal will prove to be arduous opponent – especially considering that losing would all but hand them the Barclays Premier League title.