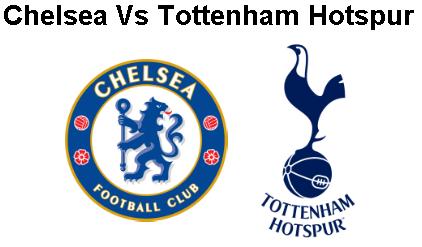 Chelsea vs Tottenham – After the comprehensive 3-0 win against West Ham at Stamford Bridge, Chelsea now stand 2nd in the table six points behind Manchester United and three points ahead of Arsenal.

Tottenham meanwhile lie fifth in the table four points behind Manchester City and three ahead of Liverpool.
Of the two teams, Chelsea are looking in ominous form with back to back wins under their belt and with Fernando Torres opening his account for Chelsea things look even better. Tottenham are going through a lean patch which has put their Champions League qualification hopes in serious doubt. Chelsea will start favorites for this game and with the chance of catching Man Utd at the top this is a must win game for Chelsea.

Chelsea have a fully fit squad to select from after Alex, Ramires and Essien overcame their respective injuries.
But Alex might just make it to the bench. Meanwhile Tottenham check on Gareth Bale, while Vedran Corluka is a doubt and Alan Hutton, Ledley King and Jonathan Woodgate remain on the sidelines. Niko Kranjcar and Wison Palacios are also missing.

The last game against West Ham was really one of my best games of 2011, not only Chelsea won the game easily but it was just amazing to see the reaction of the crowds, the players at Stamford Bridge once Torres scored his goal.

It showed how united we are as a team and a unit, Nando attracted too much criticism since he moved to Stamford Bridge and even before this game he was lambasted for not scoring any goals but as a Chelsea fan I knew like many others that Torres would soon find the net as the games went by.

Suddenly this jubilation and the belief that we can still win the Premier League has sprung up. By winning the game against Spurs Chelsea will definitely increase the pressure on Manchester United who have a very tough game on their hands this Sunday against Arsenal at Emirates. If they do slip up against Arsenal it will be just a three points gap with three games to go with Chelsea to visit Manchester United (a decider for sure).

Concentrating on this game, for me Torres has to start and should partner Drogba up-front. As I mentioned earlier during the game against West Ham it could all come down to the goal difference and meanwhile Chelsea are two goals down compared to Manchester United. We need to put as much pressure as we can on Man U and see if they do crack (which I desperately wish they do). It can be 4-3-3 or 4-4-2 but with the services of Lampard, Essien and Malouda we can open up the Tottenham defence and get Drogba and Torres to latch on to the chances created by these three.

Tottenham with Bale, Lenon, Van Der Vart and Defoe are an attacking side as well but with this they create a opportunity for a Chelsea counter attack which Chelsea should use fully in their advantage, but still a tough game, a battle between a team looking to win the Premier league and a team looking to secure a spot for the Champions league qualification.

I go for a 4-1 Chelsea win with goals from Torres, Drogba and Lamps for Chelsea.

Carlo Ancelotti has confirmed that he has a fully fit squad to select from for the game against Tottenham Hotspur this Saturday as Chelsea try to close the gap to three points over league leaders Manchester United, who play Arsenal at Emirates this Sunday.

Carlo Ancelotti on the game against Tottenham: “We have to do our job and that’s to win against Tottenham. It will not be easy because Tottenham are a very strong team but we have to keep it open in the Premier League until the last minute.”

“Tottenham are involved in a fight for fourth place and they will try to do everything against us because they have a chance to close the gap with Manchester City. Maybe they will use this game to improve their season.”

“Tottenham play attacking football, so we want to do this. It should be a fantastic game to watch.”

“They can attack with Gareth Bale, they can counter-attack with Aaron Lennon, they can use their abilities in the air with Peter Crouch and they have Rafael Van der Vaart who is a very good player who can play in the hole, so they have a lot of skills up front. ‘We have to be able to control this and to use our play to win the game.”

“I was very happy on Saturday because I understood Torres needed to score to move on from this moment. I was not surprised by the reaction of his team mates because in the last games they tried to do everything to help him score.”

“Everyone was happy; the atmosphere at Stamford Bridge was fantastic when he scored.”

“Obviously he will have less pressure now, this is normal because he scored the first goal for Chelsea. In the next game he will show his quality.”

“Maybe they have to sacrifice something with their abilities, their skills, but they can play together and it is good for the team to reach better results.”

“We tried it this week in some training sessions. Today’s too early to make a decision about this but it will not be a surprise if they start together on Saturday.”

“We don’t have a problem playing 4-4-2 or 4-3-3, the result doesn’t depend on the shape you use, it depends on the motivation and spirit your players have.”

Salomon Kalou on Gareth Bale: “If he [Bale] does go to left-back and attacks a lot then there is a space behind him. It is hard to do both, the way you attack is not the way you defend, and I think he is more a left winger than he is a left back now as he hasn’t been playing that position for a while.”

Salomon Kalou on the game against Tottenham: “‘It is going to be a great game. Tottenham are a good team with some great players and it is a London derby. It is a fight all the way along to the end of the season now and we can pull off a good game. We must focus on our own game because it is very important to keep Manchester United under pressure until Sunday when they play their own big game against Arsenal. Everything is possible in football and we have to believe that.”

Salomon Kalou on the Chelsea team and the title race: “Mentally we have been strong and also it is because we have players back to their top form.”

“We have quality players in the team but if they do not have the confidence to play at their best level it is difficult to win games. It is very important that they have now found their confidence and that has helped the team a lot.”

“We have the experience of winning, we have been there a lot before, and that is why we can pick up the fight and come back towards the top.”

“The season is long and you can always have good times and bad times and we had the bad time in November and December which was longer than usual, otherwise we would be at the top by now. But we are still fighting although we know we can’t make a difference if Man United win all their games, but you never know in football and we have to continue to play our best.”

Chelsea’s home record against Tottenham in the Premier League

Chelsea are now unbeaten in nine Premier League games and have won their last four, our best sequence of victories since we won their opening five games of the season.

Tottenham, meanwhile, are unbeaten in their last six Premier League games, but they have won only one and taken eight points from a possible 18. So Chelsea are looking to extend our unbeaten run against Spurs at Stamford Bridge to 24 games in 21 years. We have won 15 and drawn eight scoring 45 goals and conceding 17.

Spurs last win here was in February 1990 in the old First Division when they won 2-1 with goals from David Howells and Gary Lineker. John Bumstead replied for Chelsea.