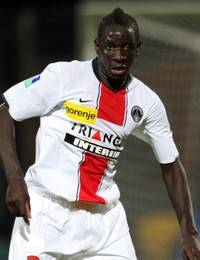 He has been in that club ever since he was a child and he is the youngest ever to captain the club at the age of 17, and that was against Valenciennes. Mamadou Sakho is a highly- rated young player, who’s being watched by many clubs around Europe, from Arsenal to Bayern Munich, there will be a huge fight and scramble for him in this summer’s transfer window if he wants to leave.

Mamadou Sakho is 6ft 2in tall, who is now 21 and has made 98 appearances so far, scoring 5 goals. Mamadou Sakho is known for being an excellent defender with great tackling abilities, who’s excellent in the air, tough, strong, reliable with exceptional leadership qualities especially for someone so young and has been likened to French legend Lilian Thuram. Mamadou Sakho is a fan favorite at Paris St Germain, not only for his exceptional ability, but also for his loyalty and love for the club.

Sakho will be hugely sought after this summer, especially if his club don’t qualify to the Champions League. Paris St. Germain have succeeded in the past few years in keeping him, but if again, they don’t qualify to the Champions League, they’re going to struggle big time. Many clubs are after this exciting player with his current value set at around 12 million pounds, Mamadou Sakho will be a name linked to many clubs and in many newspapers this summer.

Here are two videos displaying what Sakho is all about:

What do you think fellow Gooners? Do you like to see Sakho as a Gunner? Is he worth it? Do you have any other suggestions?