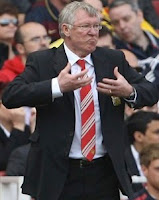 Given a gigantic chance to put the Barclays Premier League title race to bed, Manchester United stumbled yet again to allow their rivals real hope of retaining their trophy.

United put in a very dull display against Arsenal, and had their six-point lead over Chelsea sliced in half, and now it sets up another winner-take-all match next weekend, and the Reds must quickly learn from their mistakes.

What is certain is that a draw from that title-tilting match would only favor United, but if Sir Alex Ferguson is to have learned anything from the loss to the Arsenal it is to not have that same, complacent type of approach.

The Reds odd-goal loss to the Gunners, which coupled with Blue’ lone goal win over the other North London club, Tottenham, has also nullified their slim goal difference lead as both clubs are now dead-even at +38.

One thing that plays a huge part in professional sport is momentum. And, right now, it looks as though the Reds might have lost theirs a little bit, meanwhile, the Blues are gaining the initiative at the right moment in time.

The result against Arsenal was not as disappointing as the display that was put forth by each individual Red, and none of them can claim that they did themselves any justice for them to be included in every match until the end of the season. However, this type of performance can revive their hopes just as much as it can sink them. Sir Alex has coined the phrase, “squeaky bum time,” around this time of season, and that holds significant meaning during the next seven days.

United not only hosts this title-deciding match at Old Trafford next weekend, but they also have a very difficult match to come against Schalke in the second of their UEFA Champions League Semifinal.

A lot of people think that the Reds have already guaranteed their place in the final at Wembley Stadium in a few weeks’ time, but that is anything but the truth, because a two-goal lead is the worst lead to have in football. Their European tie is really at halftime, and Schalke has the attack to put more than three passed United, so to overlook this match would be very foolish on everyone’s part.

What the Reds can do though, is quickly turn around their misfortunes against Arsenal and put in a very disciplined performance against the German club, and use that as a platform to catapult their confidence before the match with Chelsea.

A lot of noise is being created about the pressure being on United and not Chelsea, but the fact of the matter is that the Reds are out in front. Yes, it was disheartening to see them give Chelsea a chance to get back in the race, but it is still a three point lead and they are the ones that are in need of the three points – not United.

Amazingly, a vast majority of the supporters are already thinking that United have slipped up and lost the title, but that is far from it and they must know that the players need their support now more than ever.

Together, the players and the supporters can overcome any sort of adversity, but separated, the season’s objectives will be lost. If that were to happen, which it won’t, everyone should point the finger at themselves, because they would be the ones to blame and not the other person.

Throughout their dignified history, Manchester United has always risen from adversity, and this current squad will do that stake their claim in that history by winning the 2010/11 Barclays Premier League title.