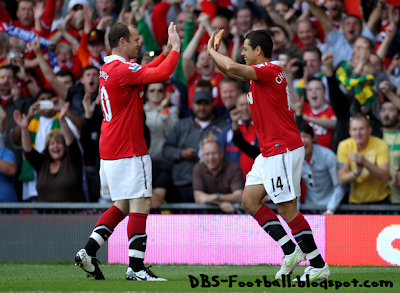 It seems as if Javier ‘Chicharito’ Hernandez is universally popular. A day doesn’t go by without someone heaping praise on his little shoulders. However, his popularity is not just because of his cute little baby face which has quite often been the picture of delight this season, but it is also because he is a fantastic, down to earth footballer, with an outstanding talent to score goals at the perfect time.

Opening the scoring against Chelsea in the 36th second was quite astonishing, but it was also very unsurprising when you consider his record. In one-on-ones, he rarely misses, and this was no exception as he swept the ball passed a helpless Cech for his 20th goal of the season. Despite setting them up for a very bad day and disappointing season overall, I’m sure Chelsea fans cannot be too resentful of the young Mexican who is more of a charming yet dangerous presence rather than a menacing and deadly presence of Rooney. But what a partnership they make!

Chicharito’s form has been watched by millions all over the world, which only helps in the praise being garnished upon him. Brazil legend Pele, Manchester United legends Sir Alex Ferguson and Ryan Giggs, the Mexican national manager Javier Aguirre and Michael Owen – whose popularity is also increasing amongst United fans, largely due to his informative and insightful Twitter updates rather than his scarce (but often valuable) time on the pitch – are just some of the names who have applauded Chicharito.

Pele commended the goal-machine of Hernandez, and stated that he may in the future be able to reach the dizzy heights of quality that Barcelona stunner Lionel Messi currently produces with ease. The three-time World Cup winner said:

“There is no doubt that Hernandez is a promising player. He is excellent, I have seen some games of his on television and he is a fantastic footballer.”

“He could be the next Messi because he has great talent; he is a big surprise just as Hugo Sanchez was because he is another that scores a lot of goals.”

That truly is a compliment of the highest degree from Pele there, though despite the obvious qualities of the 22 year-old, you may doubt whether he will reach the standard that Messi has set. We will have to wait and see, bu Sir Alex Ferguson is delighted with him nevertheless, as he has exceeded all expectations:

“When he came to us, at first we thought ‘give him a year’ but he has taken all the chances. He’s been exceptional.”

Giggs was also very complimentary of Hernandez, citing how well he has settled in England; learning the language and adapting so quickly to the pace of the game as his main points of success:

“Twenty goals in his first season is unbelievable and amazing. You are always in with a chance when you have a goal scorer like Javier in your team. He has made a fantastic impact, on and off the pitch. His English is perfect, which has helped, and his goal (against Chelsea) just sums up his wonderful season.

That is coming from a man who has won 11 and now nearly 12 League titles as well as legendary status at Old Trafford whilst still playing at 37. The Mexico manager Aguirre, who like Ferguson has worked with Hernandez as a wise manager said the United star was like one of his “children”, “very polite and hard-working”. He said that when he first saw Hernandez at the age of 15  he “could tell straight away that he was a special talent”.

Michael Owen and Hernandez have had their playing styles compared as similar, so Owen is in a perfect position to judge the progress of the lad. Owen said Chicharito has been the surprise package this year, and apart from being a “cracking lad”, he is “a better version of the current Michael Owen”.

All of this appreciation from such top professionals who have been there and done it will not however get into the players head and turn him into an egotistical maniac who feeds off the praise and becomes infatuated by himself. No, because when Javier Hernandez joined Manchester United – the biggest club in the world for £6 million just before the World Cup last summer, he said:

“I shall always be the same chap, with my feet always on the ground, and I see this as another challenge in my career. I am, first and foremost, a human being.”

Don’t you just love him? Everyone does.