Bendtner Not Happy With Wenger 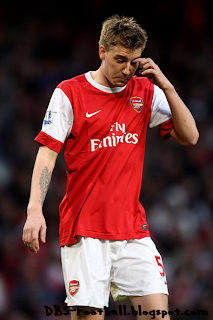 Nicklas Bendtner is unhappy with his position at Arsenal and will have talks with Wenger to try and resolve his issues at the end of the season. Bendtner criticised the use of his talents by complaining about the position which Wenger has deployed him in this season; on the right wing rather than as a striker leading the line.

“I’m concentrating on getting the Champions League place and then we’ll do the evaluation at the end of the season. It’s certainly not the best thing for me but it’s not up to oneself and sometimes you have to adapt to what the manager says.”

The Danish striker is 23 years-old and supremely confident. He believes that he can be the best striker in the world, and last year he promised to show it this season. However, he has only managed 16 Premier League games, with only a few of them being when he has started the game, so proving to the world how good he thinks he is hasn’t materialised. He said:

“If you ask me if I am one of the best strikers in the world, I say yes because I believe it.”

This confidence may well have worked against him. When you speak about yourself in such a cocksure manner, people will expect that much of you – they expect you to go some way in proving your worth. When you don’t prove it, you let people down, and that has only been emphasised this year with Arsenal having such a disappointing season.

Some do believe what he says he can achieve, while others are frustrated and infuriated simply be the sight of him, and believe maybe now is the time to let him go and prove himself elsewhere. He may have scored 10 out of 9 (yes, 10 out of 9) in an Arsenal psychological test to determine his mental ability in the area of “self-perceived confidence”, but his performance ratings are much lower than that. His confidence is more than his quality, and what Arsenal need to win a trophy or two is balance and stability in their players, not Bendnter.