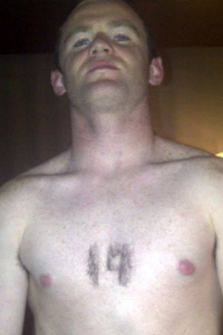 Wayne Rooney shaved the number 19 in to his chest hair following Manchester United’s 1-1 draw with Blackburn that clinched their 19th title, then promptly ‘Tweeted’ the photo on the popular networking site ‘Twitter’.

It is a rather strange way to celebrate but certainly goes some way to showing his commitment to the Man Utd faithful after a difficult year at Old Trafford. Although as a boyhood Everton fan, cynics would say it was the Evertonian in Rooney more than the Mancunian that was having the dig at Liverpool.