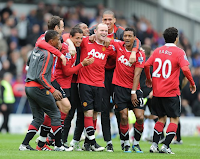 Only needing one point from their remaining two fixtures, Sir Alex Ferguson set forth a strong Manchester United starting XI, but it took some steel to get that against Blackburn.

Wayne Rooney’s emphatically struck second half penalty sent United supporters around the world into complete jubilation as the club became the most successful club in England.

As expected, Blackburn did not layover and make life easy for the Reds, but some players made it easy for them.

Over the past couple of months of the season, Sir Alex has rarely had to call upon anyone besides Edwin van der Sar, but he was given a rest against Rovers – and the defense seemed to have fallen apart. Tomasz Kuszczak put in one of those “I couldn’t care less if I am off in the summer performances” against Blackburn and it will be amazing if the Gaffer includes him in either of the next two games.

Not once, but twice did Kuszczak allow Blackburn to close him down and nearly have the simplest of tap ins. Fortunately, neither of those two mental lapses in judgments did not wind up in goals, however, what it did is it invited Rovers forward thinking that they could get something from this game – which they did.

While he could not do anything about Brett Emerton’s finish from close range, Kuszczak could have done better with the initial cross and he got the slightest of touches that may have kept the ball in, which was down to his positional awareness. There is no questioning that Sir Alex may taken a long, hard thought about putting young Ben Amos in net for the second half, but that would have taken one of his attack-minded substitutions that he was going to have to make away from him.

There is no question that Blackburn’s goal took the wind out of United’s sails – the game went an entire 15 minutes without them creating a chance worth mentioning.

As the game wore on, the nerves and frustrations started to build, which was evident by some of the disagreements going on between some of the United players. The game could have went south quickly, especially when Blackburn burst forward with and Martin Olsson’s header smacked the outside of the post, but, instead, they were given a lifeline by the referee.

Before that happened though, Phil Dowd, who refereed United’s controversial 3-1 loss to Liverpool at the beginning of March, looked to be against the Red Devils again. Twice, the referee whistled against United for infractions that were initiated by Rovers, when Rooney and Antonio Valencia were fouled by Jermaine Jones and Gael Givet, respectively.

However, he knew that there was a major decision to make in 72nd minute when Javier Hernandez and Paul Robinson raced for a ball in the penalty area. To Dowd’s credit, he was not in the position to make an accurate assessment of the call, so he relied on the decision of his assistant, which he deemed that the Rovers’ goalkeeper chopped down Chicharito rather than getting the ball. The linesman could have ruled either way, because there was contact, but Hernandez’s touch was heavy and away from goal.

Although the penalty was awarded, there was still a lot to do, and it was not a given – especially with United’s record this season with penalties – that they would score. There was no question that Rooney wanted the responsibility to ensure the destiny of this year’s title, and he struck the ball with complete calmness and conviction.

It was a job a well done by Manchester United, even though they decided to continue to do things the hard way.