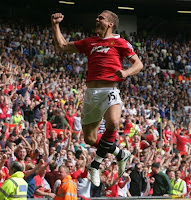 The 2010/11 season is drawing to an end, and it is time to select the Manchester United Player of the Season, which should go to no other than Nemanja Vidic.

The sturdy center-back has been one of the main reasons for the Reds success over the last couple of seasons, but this year Vidic has taken on more responsibilities and was the most consistent player in the starting XI.

With football being a team game, there were plenty of Manchester United players who threw their names into the player of the year’s hat, which led to The Busby Way and Red Flag Flying High having different ideas to who should win the honor, but here is why Vidic deserved the award this season.

After suffering a dip in form last season, Sir Alex Ferguson not only handed Vidic a new long-term contract, but he also presented him the captain’s armband on a permanent basis, because he knew just how influential he would be.

With two games left to play, Vidic has featured for United a team-best 45 times – tied with the ageless Edwin van der Sar – which was the main reason for Sir Alex selecting him as the club’s skipper. With the big Serbian leading the way, the Reds have posted 27 shutouts in their 57 games so far this season, and Vidic was a main part of 18 of them.

What is most impressive about being able to keep that many clean sheets, Vidic was faced with a constant rotating side around him – including his central defensive partner. Sir Alex has always said that the team’s success will often be dictated by the stabilization at the center-back positions, and he has done that with multiple partners.

Rio Ferdinand is, without question, his preferred partner, but, unfortunately, he has not been fit for big portions of the season, which saw Vidic having to partner young Chris Smalling – and he did that without hesitation. Smalling is in his first season at Old Trafford, and more often than not he would have been asked to play a bit part role, while learning his trade, but alongside Vidic he looked a season professional.

So on top of his big brother role, he had the task of making sure that he did his best not allowing opposing teams a sniff at goal, which is one of Vidic’s best attributes.

Being the strong, fearless type of defender, Vidic continually put his body between the ball and the goal to prevent van der Sar from being overused. A lot of the teams that play against United do not use the methodical approach of passing to create opportunities, so Vidic was forced to use his head when dealing with the long-ball approach against big, athletic center forwards.

Most managers are, or should be, smart enough to have their game plan bypass Vidic and attack United from different areas, but the way he helps out his teammates should never go unnoticed. The United defender wears the No. 15 shirt, which is not a traditional number for a center-back, but he epitomizes what one should play like and he never hides in big games.

Playing at Manchester United, players are well aware that they are going to get their opposition’s best game of the season, which means that they need to step of their game – and Vidic does to aplomb.

Not only does Vidic have to be a massive presence commanding his own penalty, but he also enjoys being a nuisance in opposing teams area. That tenacity has led to Vidic scoring five goals, which is fourth best on the team – and he even registered an assist this season.

Four of the five goals he scored were with his head, which is down to his complete disregard for his own safety and desire to do anything for the team, however, he struck a goal this season that most center forwards would have been proud of.

Following a corner, Rooney laid the ball on to Vidic, and he put his foot through the ball and left Brad Freidel, who normally has his match of the season against United, rooted to his spot and just watch in amazement as his shot rippled the back of the net.

While that was his best of the season, it was not the most important goal Vidic scored – because he scored two of the most vital goals that helped guide United to this year’s title.

When United are searching for a late goal, Sir Alex does not always send on a center forward – he normally just sends Vidic forward. And back in November that paid dividends against Aston Villa. United gave up two goals and were being completely overran at Villa Park, but Federico Macheda halved that lead with a thundering effort. However, United still need at least another goal to get a point, and who popped to score it? Vidic – with a expertly placed diving header at the far post.

While that was impressive, Vida proved that he wanted this title just as much as anyone else and he got the eventual game winner in the title-tilting match. Being up a goal, courtesy of Javier Hernandez, the United center-back reacted quickest to nod the ball passed Peter Cech to give them a two goal lead, which all but sent the trophy back to where it belongs.

These are just a few reasons why Nemanja Vidic is the clear favorite to win the Sir Matt Busby Player of the Year and why he has already being selected to the PFA Team of the Year, but it is the intangibles that has endeared to hearts of the Manchester United supporters.