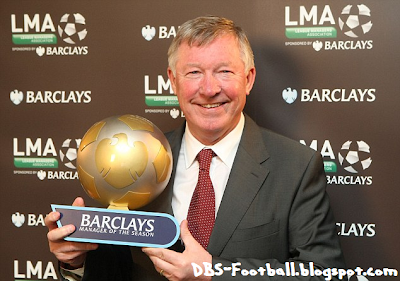 Sir Alex Ferguson and Nemanja Vidic were the deserved winners of the manager and player of the season awards. The votes come from representatives of football’s governing bodies, the media and supporters, and with the Manchester United pair winning the Premier League as well as making the Champions League final, it seems the voters were correct in their decision.

Winning the Champions League final would be an even greater achievement for the Manchester United manager whose trophy stack would once again grow, while Nemanja Vidic’s total of one Champions League trophy would double. Sir Alex spoke of winning his 12th League title:

“It is no easier now than it was in 1993. It is a great achievement. Everyone has shared in it. I enjoyed it as much as my first title. It becomes more of a challenge the longer you are at the club.”

“If we are not scoring 10 goals every game, we have our critics. The expectation is high. But it is high from us too, and the fans. They want to see their best.”

“Yes, you could criticise a lot of our away performances. They have been disappointing. But our home form has been fantastic. We have scored more goals than anyone else. It is hard to criticise that kind of form.”

Vidic, meanwhile has been as solid as a rock in the United defence, helping Edwin van der Sar to 14 clean sheets in the Premier League, and, if he is given another game against Blackpool this week end will no doubt do his best to keep another one. The Serbian defender lost out to Arsenal’s Samir Nasri in DBS Football’s poll for the player of the season, but the Arsenal midfielder doesn’t get a trophy for that accolade.