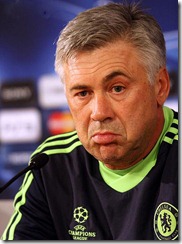 Chelsea will be heading to Goodison Park to take on Everton, in a match that could probably be providing the final bow for many Chelsea players and the manager, Carlo Ancelotti himself. The season was actually summed up in the 2-2 draw with Newcastle United last weekend, so I assume that there shouldn’t be any more surprises of how this season actually went.

Even though a win would be next to meaningless, it would still be great to finish the season with a victory and look forward to the next campaign. Carlo Ancelotti will also be very much looking forward to it, especially given that he is expected to be sacked in the coming days.

In what could be the final days of Carlo Ancelotti at Chelsea, the Italian has been speaking about the key reasons that had brought the season for premature end without any trophies. According to him, injuries to players like Drogba, Lampard, Terry and Essien are the main reasons for the team failing to keep up the standards sets during the early part of the season.

Maybe Chelsea shouldn’t have bought Torres and David Luiz in January because according to me they did more harm to the Champions League campaign (and to the season as a whole) rather than help it. However, you don’t often get the chance to sign a player like Torres everyday and one can really understand where the decision has come from. Ancelotti said,

‘They are a strong team. They have fantastic organisation defensively, they played us and created a lot of problems.’

Torres is expected to play a major part in the match against Everton in the same way that he was against Newcastle. Likewise, a number of youngsters are expected to play as this really seems to be the time when we get to see the youth from the Academy. Maybe Ancelotti should have persisted with them instead of going for the expensive way, but it has been done and dusted and the season is closing. It is vitally important that Chelsea sign off with style and to a possible extent, Carlo Ancelotti as well. Everton come on the back of a defeat against West Brom and are likely to be looking for the same as well.

My predictions: Chelsea to draw 1-1